The first day of the rest of his life

And I've got to tell you, I'm having a blast with it.  I mean, not so much the hashtag, but the need for it: having a kindergartener.

Now, given that Seth had been in some sort of organized preschool program since August 2009, my emotions of sending my baby off to school were pretty stable.  Granted, I came to the realization VERY quickly that this experience is NOTHING like I've encountered in the past, and I'm sure I'll be blogging about those specifics in the coming months.  But as for the first day jitters.....there were none.  Just a whole lot of smiles and hugs and "I'm so proud of you" moments.

Jim started his day a little later than normal so that he could help get Seth awake and dressed, and to pause for the obligatory front porch pictures. 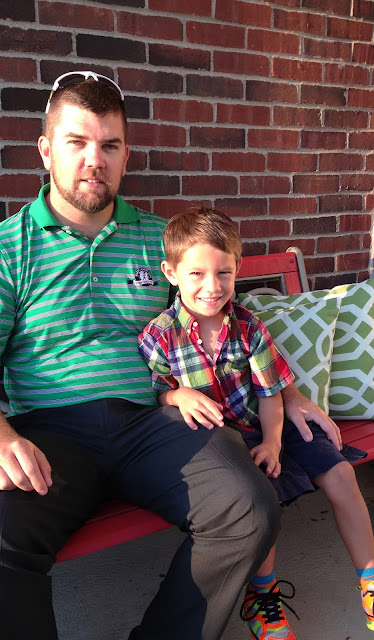 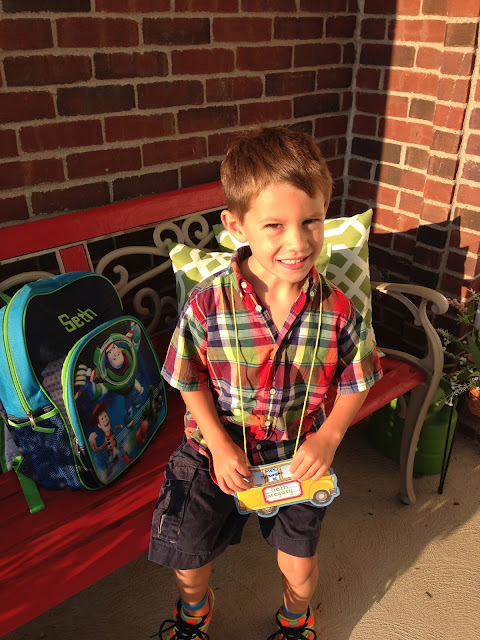 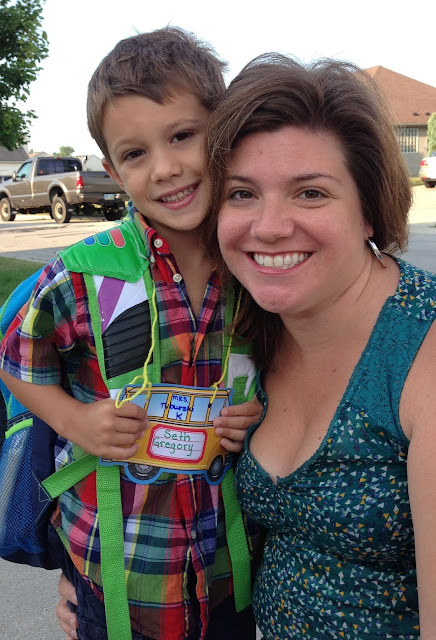 Seth and his best buddy Lucas stopped their hooting and hollering long enough to snap this priceless shot.  I can see this one going up on some "through the years" photo boards for the graduating class of 2026! 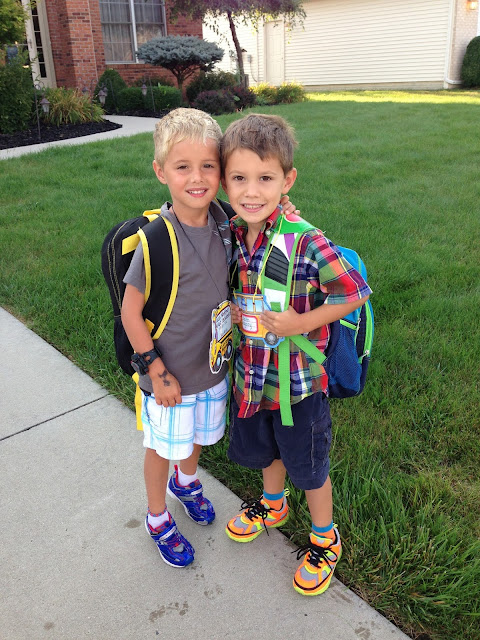 Little Miss and Mister couldn't miss out on the ceremonial first day pictures, either, and luckily every one was in good enough moods to capture some sweet early morning smiles. 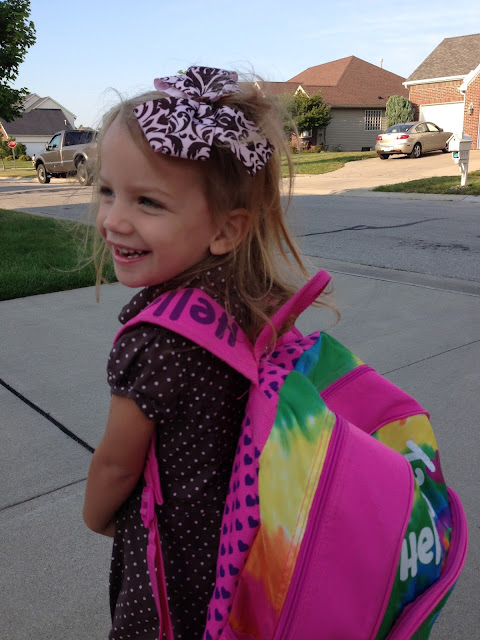 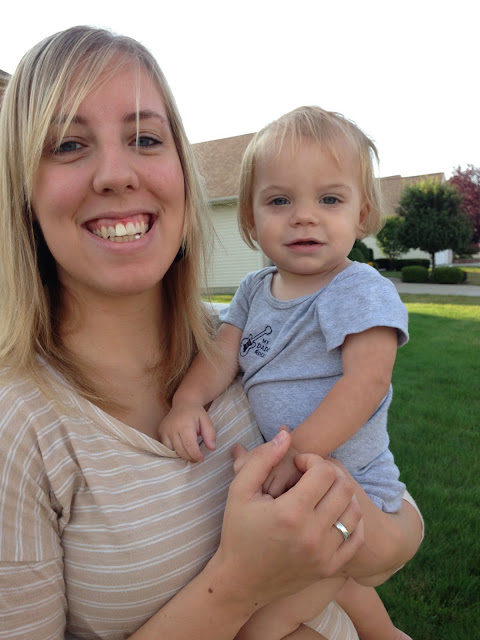 This has nothing to do with kindergarten, per se, but it is worth mentioning.  I never EVER could figure out how to take a screen shot on my first smartphone (a Samsung Droid).  Thankfully, I now have an iPhone5, and I can take screen shots like a pro.  Which ended up being much needed when I accidentally video filmed Seth getting on the bus instead of snapping a photo.  But!  I managed to pause the clip to capture this perfect, sums-up-the-morning-to-a-tee shot, and I am not ashamed to admit that I look at it probably a dozen times a day.  I can't believe I'm lucky enough to be this kid's mom.  He is so unbelievably awesome. 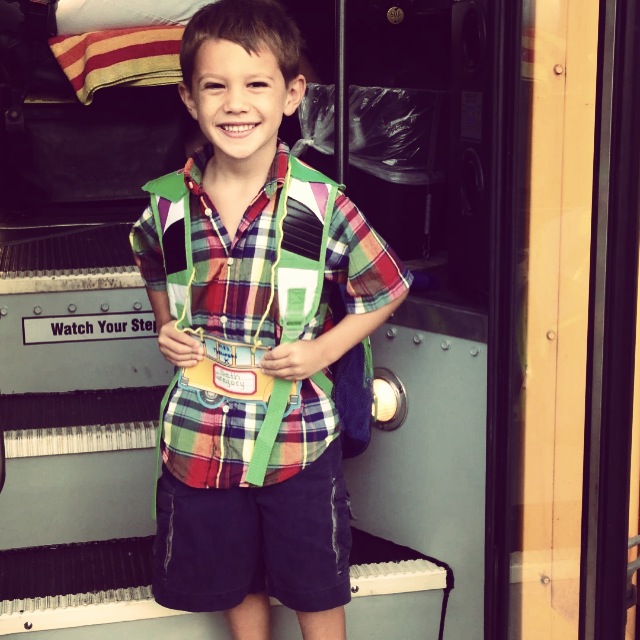 They tell you it will happen.  And it's not that you don't believe them.  You just don't know what the "it" feels like until your turn finally comes.

But then it does -- your turn -- and you find yourself in that moment that they warned you of.  You wait for the feelings (that, as it turns out, are custom made for you and your child) to wash over you....  The wave comes; crests as the hydraulics swing shut the bus doors; abates as the yellow tube-with-windows turns left at the stop sign.

There you stand, in the sun, and you think to yourself, "yes, it was just that fast, and now it's over.  It WAS just yesterday that he was learning to walk/trying to talk/fitting into 12m overalls.  Just like that, he's gone.  Off to conquer the real world, one grade at a time." 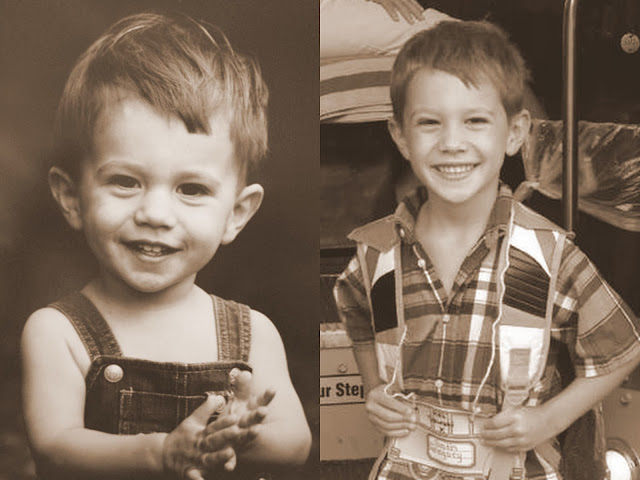