Have y'all heard of DietBet?

It is super user-friendly site, and a fun way to challenge yourself and friends to drop a few pounds.

Essentially, you have a set amount of time to lose a certain percentage of your body weight.  You have a set amount of money that you put into a "pot," and at the end of the "game," all those who meet their goal split the pot.  I recently participated in a challenge to drop 4% in 4 weeks, with a $10 pay-in, and today was our final weigh-in.   As of right now, 3 of the 12 participants (myself included in the 3!) have met our goal, so as it stands right now, I'm getting $40 back instead of my $10.  Yippee!!! 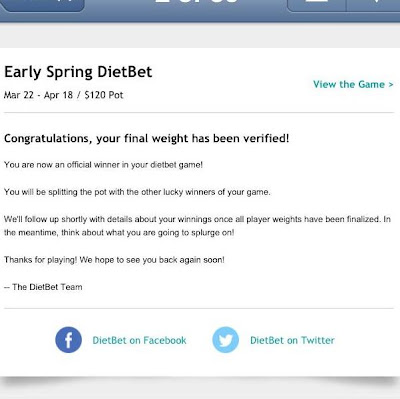 More significantly, though, is that I am finally -- FINALLY! -- out of my Phase II of my original (and failed, sigh) 30 x 30 plan.  That is HUGE.  I'm finally at pre-Duncan weight, and that is so physically and emotionally significant I can hardly explain.

It looks like we are going to be starting another DietBet game next Friday, so if you want in on the fun, just leave me a comment, and I'll get you hooked up!
Posted by The Writer Chic at Friday, April 19, 2013 4 comments: 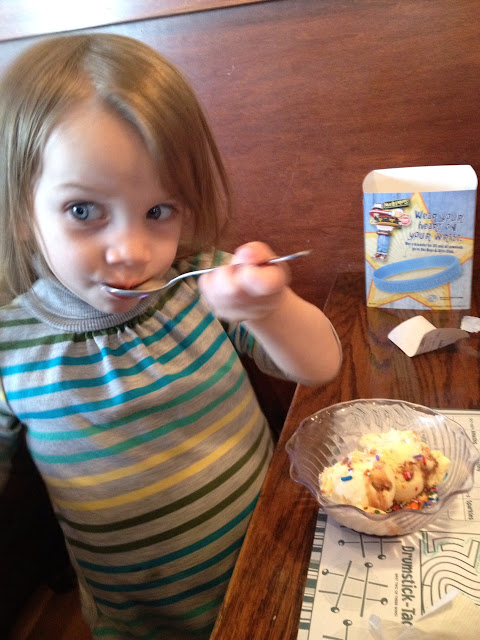 "Mommy, you knows who my fav'ite?

Seth has a themed show and tell this week, and they have been talking about dinosaurs.

He couldn't decide if he wanted to take his Rex, or show off a pair of his dinosaur socks.

Here is my solution: 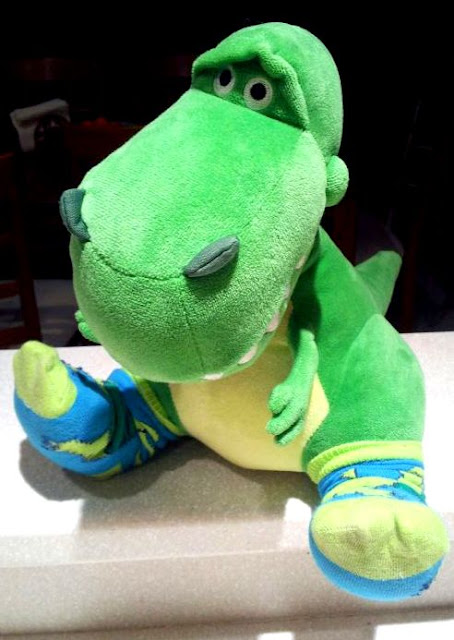 And I'm officially the coolest mom ever.  Go, me.
Posted by The Writer Chic at Thursday, April 11, 2013 No comments:

BLTN: Our journey with James

Well, here is the post that is going to necessitate a whole new label over there in the "looking for something" cloud.

-FREE.  (And to clarify, the dash is intentional.  I'll explain in a minute.)

If you scroll back through posts since James' birth -- well, let me rephrase that.  If I had been better about posting regular pictures since James' birth, you'd notice a couple things: that he constantly had scratches all over this face and scalp, or, that we constantly kept his hands covered with baby socks.

What was being passed off as eczema just didn't sit well with me.

And then, the week after Christmas, when James was seven months old, he developed a peri-rectal fissure, and thus began the run around between multiple pediatricians, pediatric gastroenterologists, and allergists.  MRSA, Celiac disease, Crone's disease -- all these and more were tossed out as possible issues our little man was facing.  Blood work, stool samples, ER trips due to abscess ruptures that filled his tiny diapers with blood....  This is what made up our January and February.

And in the midst of it all, the only this we know thus far is that James is moderately (3, on a scale of 1-5) allergic to gluten [but he doesn't have Celiac -- whoohoo!!!], dairy, and peanut.

James is still having a lot of digestive and growth issues, so table food is slow going, therefore, he is still at least 80% breastfed.  Which means that, for now, I'm also gluten-, dairy-, and peanut-free.

These past three months have been hard.  Frustrating.  Time consuming.  Pizza, chocolate, and ice cream-deprived.

But we are seeing improvement with James in several areas, so we feel we are on the right track.  I'm not loving the approach the doctors are taking, but I have been blessed to have a handful of girlfriends (both local and in the compute -- Hi, Hillary!) who are right there with me in the allergy trenches and who have been amazingly compassionate and supportive as we try to figure this all out.

So, yes, my recipe posts may very well be taking on a gluten and/or dairy free spin, but that's okay.  I'm happy to share the recipes and sites I've found that make this lifestyle a little bit easier.

And, I'm sure it goes without saying.

He is totally worth every sacrifice. 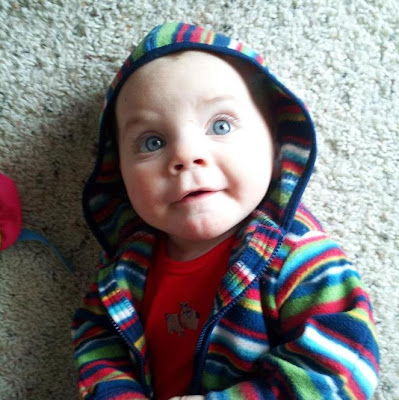 Necessity is a mother, that's for sure

You've heard the adage, right?  "Necessity is the mother of invention"?

All of our little ones have used the crib railing as a teether at one point in time.  Seth, minimally.  Erin, like a deranged beaver.  Seriously.  And James....well, he left his first mark this week.

Why I didn't think of this before hand, I don't know, but I'm feeling pretty proud of myself: 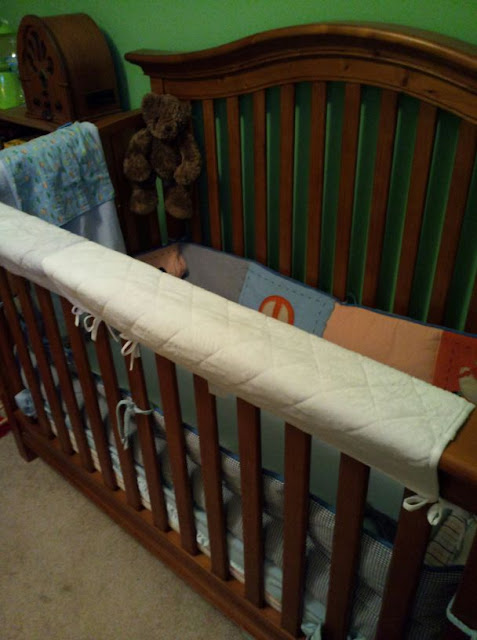 They're repurposed crib sheet savers!  I loved having these in both the crib and pack 'n plays when the kiddos were newborn, but once they were mobile, the usefulness of these kind of tanked.  But, duh!  How perfect is this?!  They are quilted, easy (for me) to get on and off to wash (when they get all drool-y), and don't look too out of place, like some other rail protectors I've seen.

Anyway, I know this is hardly riveting blog fodder, but I'm thrilled that I found a way to reuse something, and not spend any more money on briefly-used baby paraphernalia.  (Especially since I think we are going to need to drop $90+ for some baby gates to block the staircase.  Boo.)

Have you had any "Aha!" moments lately that you want to share?
Posted by The Writer Chic at Tuesday, April 09, 2013 No comments:

Tiff's birthday is this Thursday, and since she got seriously gypped last year (when she turned 21) since she was at basic training, I wanted to make sure she really felt the love this year, so we started celebrating her birthday Monday, to make the fun last all week! 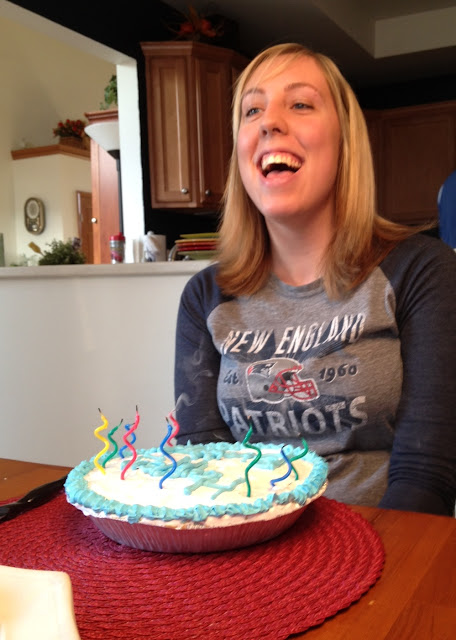 I made her a yummy chicken dinner (more on that later -- I roasted my first chicken!), and picked up a Graham Central Station ice cream pie from Handel's.  Simple, yes, but it got this smile, so I think it was a success!
Posted by The Writer Chic at Monday, April 08, 2013 No comments:

This is how I feel when I set goals for myself that I know aren't realistic (like blogging, in depth, every day): 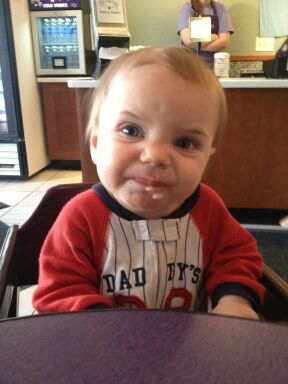 Tomorrow is a new day. 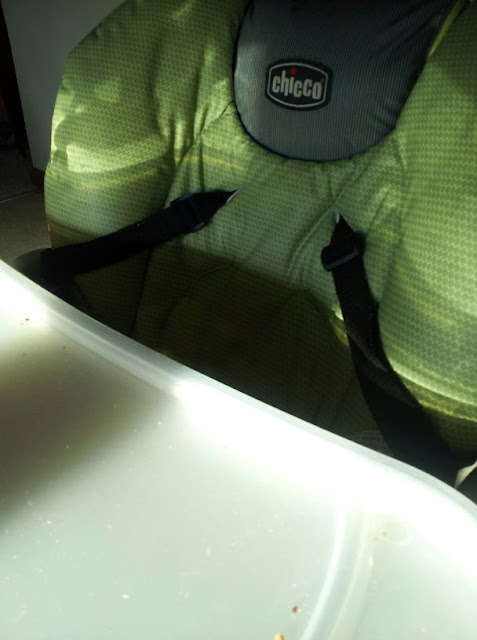 When I went to pick James up out of his high chair after dinner tonight (dinner, which, by the way, was, for James, leftover Easter corned beef, and cheddar flavored almond crackers), I had to laugh.

"Seriously, dude," I said to his smiling face, "you smell like beef and cheese."

I'm living a life of movie lines, I tell you.

And if you don't know what I'm talking about, click here.

Since I talked about a Christmas tradition yesterday, I thought it only fitting that I address an Easter tradition today.

The kids get exposed to enough commercialized Easter Bunny rigamarole at school, etc., so we don't really play that up at home.  The Easter Bunny doesn't come to visit, or leave baskets, or eggs.  I mean, we DO a hunt for candy-filled eggs, but we don't tell the kiddos that the Easter Bunny left them.  (Granted, we don't tell them that WE hide them, either, so I'm not sure where they think the eggs come from....but I digress.)

We decided to just put out the eggs in our yard Saturday night when Jim's parents and my dad were over for dinner, and it worked out better that way anyways, because the weather wasn't too promising on Sunday.

Erin just got new Crocs; they are still a little big.  Which posed a problem as I considered how the egg-finding might not end up too balanced -- if she were tripping her way through the yard.  So, at the last minute, before we let the kiddos out of the house, I explained that Seth was only to put blue and orange eggs in his bucket; Erin was only to pick up pink and green.  All yellow and purple eggs were for James (ie, Daddy, lol), and were to be left in the grass.

And it worked BRILLIANTLY!

If Erin would come across a Seth-egg, she'd yell excitedly for him; and visa versa!  And then, when their buckets were full to overflowing, they went back around the house, and Seth picked up the yellow eggs and Erin retrieved the purple.  Seriously, this is how we are hunting eggs from here on out!  EQUALITY FOR ALL! lol

I have more pictures of the actual hunting, but.....I've been nursing a migraine all day, and the effort of editing and posting any more pictures than the one gratuitous clip (that I can't even take credit for -- Tiff took it!) that I pulled off of Facebook seems a little daunting.  So.  Simple cuteness will have to suffice for now!
Posted by The Writer Chic at Wednesday, April 03, 2013 1 comment:

Have we talked about traditions before?

I can’t really think of any hard-core traditions from my childhood, and I can honestly say that I’m okay with that.

That said, though, it leaves me puzzled as to why I want so badly to create traditions/memories for own children, especially when it comes to annual events.

One new tradition we started this year was the super-trendy Elf on a Shelf.  I know, I know.  But c’mon.  We don’t use it to prompt good behavior, and the kids think discovering the overnight antics of our elf, Linus, is such fun.  So, yeah.  We are officially an elf family.

Click here to see a recap of most of Linus’ shenanigans from the holiday season, 2012. 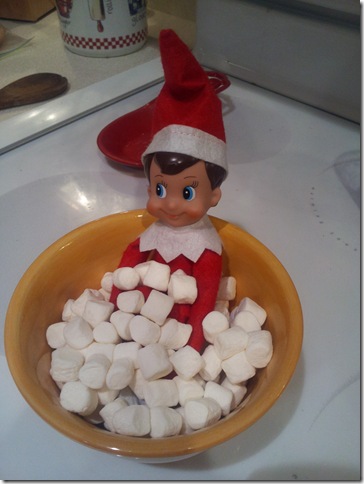 This isn’t an April Fool’s joke, I promise.

This is me, saying it out loud in the hope that it’ll keep me accountable.

It is simply unacceptable that this blog – this family record – has been so neglected.  I can’t hardly fathom the topics that haven’t been documented in the last year-plus.  So.  I’m rectifying it, this month.

Every day in April, all 30 days, starting today, I’m going to post about something that has been overlooked.

Have I told you about flying to LA to film a parenting documentary?  And that I did that in October of 2011?  Nope.

Did I tell you about my first trip back to Toledo Hospital after Duncan’s birth?  (It wasn’t to deliver James; it was before that, and it was traumatic.)

Have I told you about Christmas?  The outcome of Erin’s surgery? The health issues with James?  Our home renovations?  That Tiffany has come to live in Ohio?  Seth’s birthday?  James’ nursery?

Big fat HECK, NO, to all of the above. 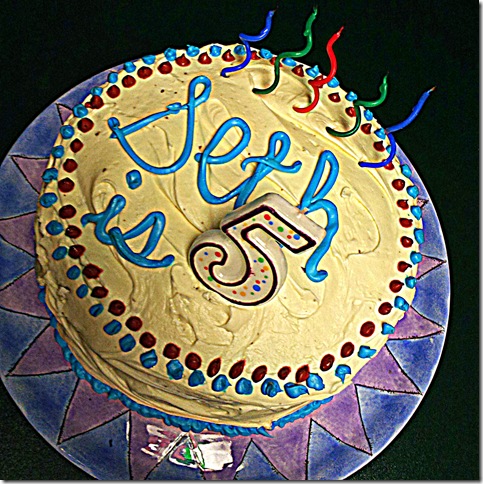