Everybody always feels badly for Seth, whose birthday falls just a week or so before Christmas.  But let me tell you, this kid gets his celebration all sorts of  drug out. =)

We decided to start the fun by having a cake-and-presents party over the Thanksgiving holiday when Tiffany would be in Ohio with us. 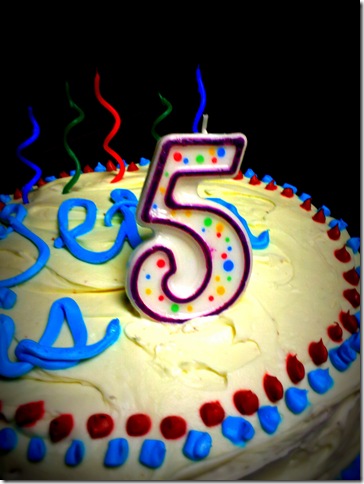 I can’t tell you how unbelievable it is that he is 5.  I mean, doesn’t FIVE signify a rite of passage of some sort?  Like, leaving the toddler/preschooler years behind, and now he is a bona fide KID?  Eek!  I don’t feel any older than I did when I delivered him at 27! 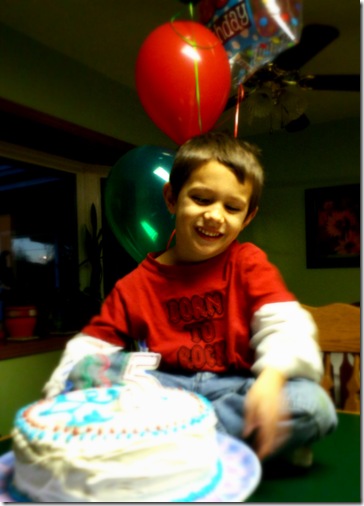 I decided to do a homemade cake this year, and I have to say, it turned out great, albeit simple.  A double layer chocolate cake, with green mint icing in between the layers, and whipped vanilla (his fave) to frost.  Some simple food coloring in the left over frosting, piped onto the edges, and a couple swirly candles later, and voila! 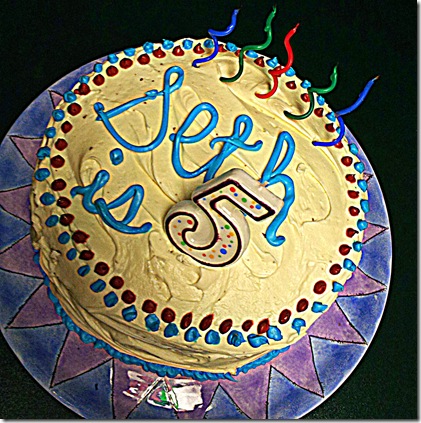 Of course, I’m realizing now that I have no pictures of him opening his gifts, because I wasn’t on camera duty, but rather on hand-out-the-gifts-in-an-orderly-fashion duty.  We kept it pretty simple this year; he received several more of the Rescue Bot action figures he’d been wanting from Tiff and the grandparents, and we gifted him with a Kindle Fire.  And let me tell you – that was plenty, and, we felt, appropriate for this year.

And I have to say, as I’m typing this, I’m realizing that Seth’s FOURTH birthday TOTALLY got the shaft on the blog, too, since we were in the middle of our move….. 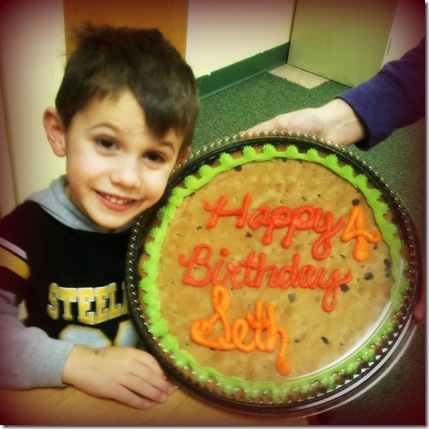 We did a doctored-up Walmart cookie cake to take to his last night of Cubbies, and then Gramma ordered another cookie to snack on during the actual load-‘em-up-move-‘em-out portion of the week that overtook his birthday, and we devoured that one while we were crashing at the Cooper’s house: 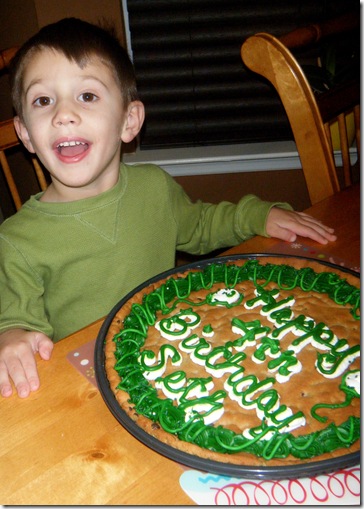 And that’s just how we roll!

I definitely think that we have at least another year or two where Seth is going to struggle with being the only kiddo in our family to have a birthday that ISN’T in May, but that just means that we will have to work extra hard to make him feel special when it IS his turn.