This is what is known as BABY FAT 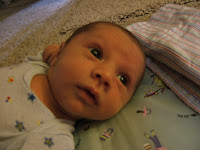 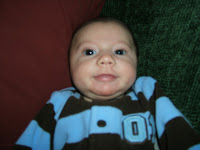 He is doing so well this week. (So is mommy, but more on that in a minute.) Here is a funny story about Seth's "day care experience" thus far:

When I was over at Sara and Jessi's last Wednesday, Jessi's two-year-old Caleb was less than impressed with Seth. (This poor child is in for a rude awakening when his little brother or sister arrives in July.) Jessi was holding Seth, and Caleb was none too thrilled with her. When Jessi asked if Caleb would be Seth's friend, since they'd be playing together every day, he noncholantly replied, "No....he can go home with her," pointing at me. Hah! So on Monday, when I got there to pick up Seth, I wasn't too sure what I'd find. Well, Caleb was sitting on the floor next to Seth, gently patting his head. As I walked in, he cried, "It's Seth's mommy!" (How cool does that sound?!) I asked Caleb if they'd had a good day and if Seth could come back tomorrow, to which he said "yes" (yea! progress!), and then he solemnly said to me, "Monica, Seth does not cry AT ALL!" (Again, I say "hah!" I told Jessi that they might want to remedy Seth's behavior or Caleb was going to be very disillusioned about what babies do!) I just thought the whole exchange was so precious, and just reinforced how thrilled I am with the childcare God has provided to us with these two wonderful sisters-in-law, even if only for a short time.

My first days back at work have actually been wonderful. I'll spare you the details that are only important, I'm guessing, to me, but let's just say that yesterday something happened that caused me to remember how much I actually love my job (even though I can get caught up in the drama of the "politics" sometimes). It's been nice to ease back in with the half days, but I'm not too concerned about the coming weeks, as I've only taken one afternoon nap this week (and it was today, and I'm sick, so I think that's a pretty good excuse).

Anyway, that's our update for now. As the "chubby" picture of Seth up there isn't the most flattering, I'll leave you with this one instead. Isn't he beautiful? 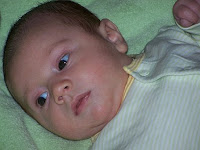 Posted by The Writer Chic at Wednesday, February 13, 2008

Aww! Love the pics! I'm so glad the transition is going well. When Zeke was with his original babysitter at 8 weeks old, her 16 month old was less than thrilled with Zeke. Kyra (the toddler) quickly learned that when I came back to get him, she would gather his things, point at the door, and proclaim "HOME, ZEKE!" LOL They get along wonderfully now. :)

I am so glad that your transition is going well! Where do you work? Seth's getting so big! What a cutie!

lol about the old man face. everyone said that about tyler too. still cute though! :) he'll just get cuter every day! :) glad the day care went well! it'll help caleb too to get ready for a baby, so it'll be a good thing all around! :)