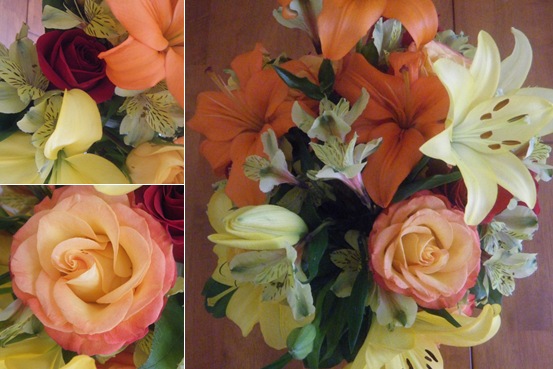 I can count on one hand the number of times Jim has sent me flowers – like, someone from the florist shows up on the doorstep because he thought to brighten my day with some posies.

I had the worst day ever recently.

Though I suppose I’d have to admit that since, in hindsight, I can’t hardly remember what made it so bad, I guess you could say “worst day ever” is a little dramatic.

Anyway.  It was a bad day.  I was feeling inadequate, overwhelmed, misunderstood.  And (again, I can’t remember) I either (a) took it out on Jim, or (b) he picked up on it.   If I had to guess, I’d say (a).  Not because it’d be unusual for him to pick up on it; it’s just more likely that I was dumping on him.

Either way, he went out of his way to call our local florist and walk them, step by step, through the arrangement he wanted them to fashion for me.  He was specific: lilies were okay, but no stargazers (I’m allergic); fall colors (my favorite); and confetti roses (like the ones in my wedding bouquet).

I even got a heavenly-scented candle along with the buds – a chocolate raspberry one.   (Hello!  I want to eat the wax, it smells SO good!)

If I’d been doing better with blogging, this would have been the post to go up last week on our fifth wedding anniversary.  But I haven’t been, so it didn’t.  But the important thing is that I’m bragging on him now.

Thank you, Jim, for making my bad days a whole lot better, flowers or no.  I love you. 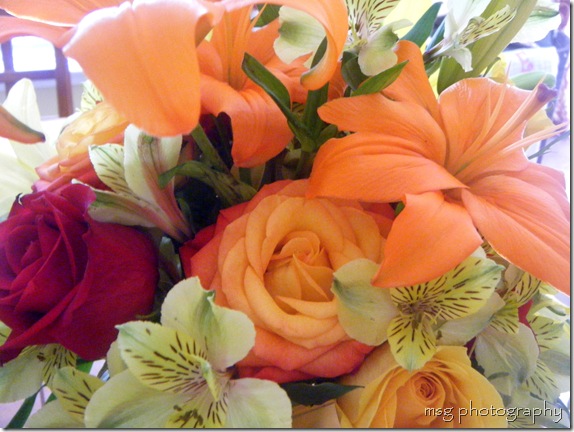 Those flowers are beautiful!

Good boy, Jim. ;) I'm glad he made your day a little brighter with that thoughtful gift. *hugs*

That's so sweet! The flowers are beautiful!

That arrangement is so gorgeous! And Happy Anniversary!

Love the flowers...and nothing beats the love of a good husband on a bad day. Just makes life better!