So, I’ve been away from the blog for about 3 weeks.  Which I’m pretty sure is as long as I’ve ever gone between posts in the three-plus years I’ve been writing.  I’d had grand plans of coming back with some great post, which would not only explain my absence, but also draw you back into reading with my wonderful, witty writing.

Instead, I’m going to merely share with y’all an email I received last night from my dear friend Sara.

But before I do, here is the back story.

Back in June, I wrote a whiny post about my disappointment in Erin’s hemangioma.  At just a few weeks old, it looked like this: 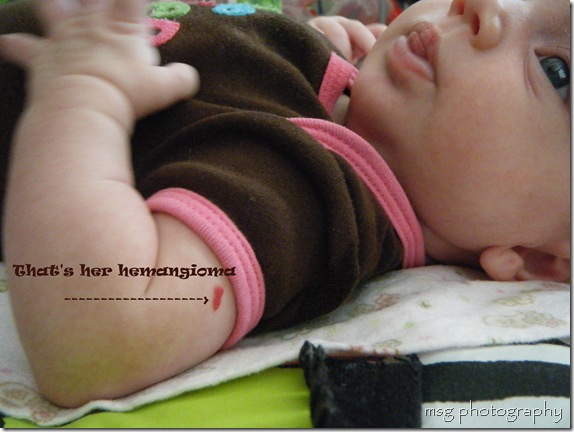 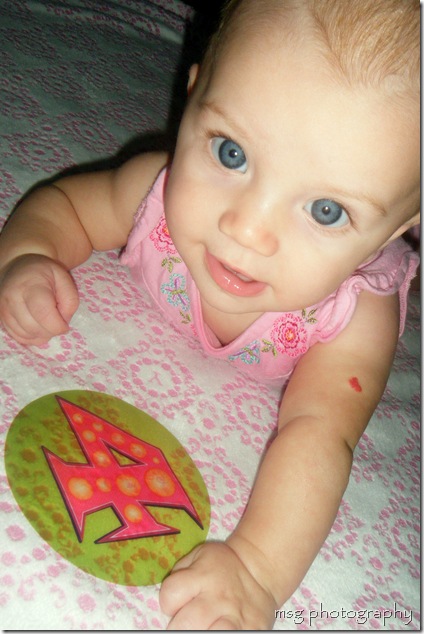 But for the most part, I don’t even notice it any more….though I’d say, on average, at least once a week, I am questioned about it by someone.

One of those someone’s is dear Zeke, who is quite smitten with our Miss Erin: 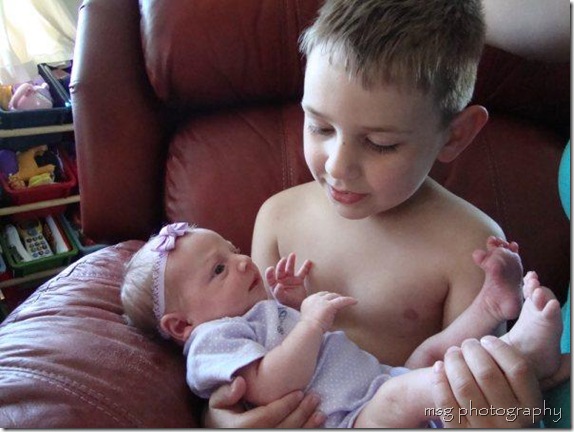 Anyways, Zeke was just here visiting us (with his family, too), so some quality time with his bride-to-be prompted the thought process that led to the conversation that facilitated this email from Zeke’s mommy:

So Zeke walks up to me in the kitchen to get his bowl of popcorn.

His shirt is off & I see a giant hicky (hickey?) on his left bicep.

I say, "Zeke! Where did you get that bruise?!" not realizing what it was at first. He looks at me like a deer in headlights. Then I realize that it was the perfect location to be a self-induced suck mark. I ask him, "Honey, why did you do that to yourself?"

His response? "Because I wanted to have a bruise mark like Erin."

Sooooo...I told him that it was NOT a bruise mark, but a birthmark & God gave Erin that special mark while she was still in your belly and that God & I don't approve of sucking on oneself.

Sweet goodness, the conversations I have to have with that child.

And to think, just a few months ago, I was wishing her mark away.  Now, it’s just a part of her – a part that identifies her to others.  I love it about her now.  As do others who know her.  I hope she will carry it confidently as she grows.

Such a precious post. She is gorgeous. I love her special mark from God. Hugs Marty

My daughter has a hemangioma in her ear. I am asked about it quite often as well... My grandma calls it an angel kiss :)

That's sweet (and funny too!) that he wanted to have a mark like her. :)

What a beautiful perspective. And, I wholeheartedly agree...sweet Erin is beautiful and precious in His sight...dearly loved and uniquely created by Him...every inch.

Hope you had a wonderful Thanksgiving my friend...and hope you are well.

Welcome back to Blogland! Somehow, I missed your earlier post about Erin's hemangioma. Anyway, as you probably know, Vivian's got a similar spot on her head. It's one of the things I've grown to love most about my baby girl - I know I'll miss it as it fades or becomes covered by hair. (If she ever grows hair.) I know one thing, her brother will miss kissing that boo-boo of hers.

Let's think of it like this - our special girls got a special kiss from their special angels.

ha! the things that go through their little minds. :) glad to have you back, monica!

:) I'm glad that little story made you smile. Love you!

oh my goodness her eyes are adorable reminds me so much of my 8 month olds!