I’d had pregnancy queasiness with all of  my pregnancies, including my miscarriages, but nothing was as bad as the all-day sickness that accompanied this final pregnancy.  It was BAD.  Between the nausea, the actual throwing up, the fatigue, and, unfortunately, repeatedly occurrences of bleeding, I had myself convinced by 6w that this pregnancy – like all my other “oops” conceptions would be doomed, and that we were just waiting for a premature goodbye.

I had an early ultrasound at 6.5w, which showed not one but two sacs.  Twins?  Again?  It was almost unimaginable.  I was asked to come back for an additional ultrasound at 8w, and at that point, there was only one baby, with one heartbeat.  Overwhelming relief quickly replaced any twinge of loss or sadness, as we prefer to keep my pregnancies as uncomplicated as possible.  I immediately began my folic acid/baby aspirin/Lovenox regimen, and waited…waited for the bleeding to stop.  Waited for the heartbeat to regulate (it was a crazy-high 180+ bpm at the 8w ultrasound).  Waited for the sickness to pass.  Waited for the flutters to start.

And October turned to November, and November became full of pre-plans to return to Ohio, and my days and thoughts became consumed with boxes and tape and craigslist postings and trips near and far.

And despite constant battles with my injection sites, 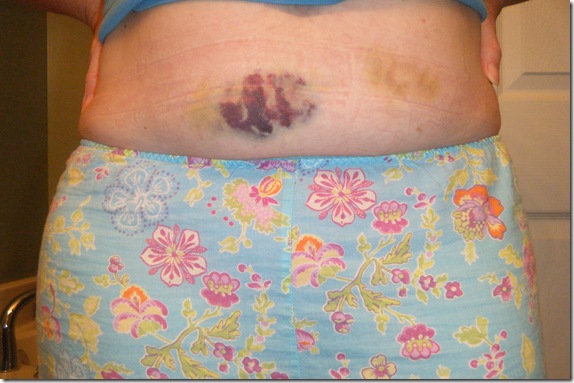 the days turned to weeks, and soon enough, I was cruising into the second trimester.

I’d had every intention, like with Erin’s pregnancy, of faithfully taking weekly pictures of my/the baby’s growth, but, alas, all I have of my first trimester, as far as intentional pictures is at 10w. 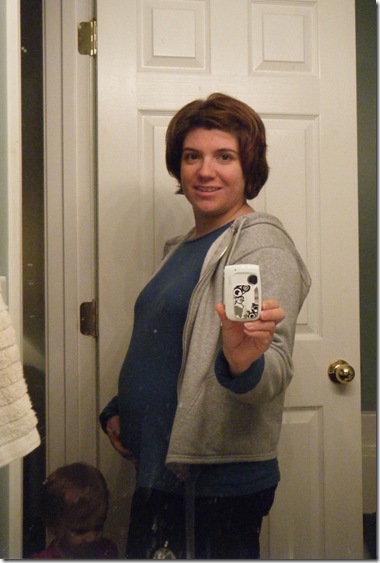 Which, is funny, because looking at this picture in hindsight, I’m completely convinced this is all bloat and not at all baby, because I don’t even look like this at my current point in my pregnancy.  Well, I’m getting there, but, still.  That up there?  Bloat, all the way.

There has been some back and forth between my TN ob and TN MFM offices regarding my due date, given that the baby is measuring ahead (YEA!) of where s/he was expected to be, and I have beautiful ultrasound pictures to confirm that this little one looks, at this point, just like his/her brothers and sister, but….again, lazy me.  I’m not going to take a picture of a picture at this point, and our scanner isn’t yet hooked up.  So, just take my word for it.  S/he is cute. =)  As for my due date, it is technically June 2.  I will deliver no later than 38 weeks, which, yes, do the math, is May 19 – Duncan’s birthday.  We are trusting the Lord to perfectly orchestrate the baby’s birthday (and honestly, we are expecting the baby to come well before 38w), but will also be working with Dr. G here in Ohio to have a Plan B to avoid having the baby so close to Duncan’s birthday.  I’m leaning toward May 11, personally, because it is exactly half-way between Erin and Duncan’s days, but again, it is a bridge to be crossed at a later day.

On another note, are you as sick of reading the whole s-slash-h-e mess?  (S/he, if that didn’t translate.)  Ugh.  I will admit, I mostly refer to the baby as “he” just because it is easier to have a pronoun.  The fact of the matter, however, is that, despite protests from the grandmothers (ahem, Mom), we have decided NOT to know the gender of this baby until delivery.  I’ll admit, the planner in me wants to know.  It’s hard not to know.  (Especially since I know that the information is already in my medical file; they were able to determine gender at my ultrasound on Dec. 14.)  And I can admit, I have a preference.  If I could choose, I would.  So, for that matter more than any other, we’ve (well, I….Jim, I think, could have happily gone either way on this decision) decided to wait to know whether we will welcome a third son or second daughter.

Anybody want to leave their guess?  I know what some of you think already, but I’m curious to hear what you all think.   It’s fun to wonder and speculate.  Feel free to tell me what you’re thinking/hoping for.  I’m also completely open to any name suggestions.  The middle name for a girl is fairly set, and I have a boy middle name that my heart is strongly leaning toward (but that I haven’t shared with Jim yet), so, we are very open to hear what others would suggest to us.

I’ll be back later this week with one last baby post (I think I’ll start the weekly updates like I’ve done in the past) and belly picture.

Honey I don't care if it's a boy or girl. They will be loved. You are doing a great job with everything that is going on. I just wish I could help you more. Love ya.

You are doing great, Monica!!! Thank you so much for sharing your pregnancy with us. So many of your pregnancy complications I can relate too...take each day as it comes and know that so many are praying for you, your family, and newest bundle of joy!!

I vote for Rick james :)

I'm thinking pink. But you can't go wrong. You make fabulous babies of every sex. :)

Thanks for the input on my post about V's bruises. Similar thoughts had crossed my mind - the only test we're waiting for results on is the ANA, which is what I tested + for after my 2nd m/c. Hate to think that far ahead for baby girl, but how much better would it be fore her to know ahead of time and prevent that heartache if at all possible? A LOT BETTER.

Sorry for the hijack. This was easier than an email. Smooches.

i always say "the sicker the mother is during pregnancy the cuter the babies!" like you, i have REALLY CUTE KIDS. i figure we worked extra hard for their cuteness. when i see a pregnant mom who says "i feel wonderful," i now feel bad for her because her kid is likely going to be really ugly.

be surprised if you can!