If you’re thorough, you may have taken our announcement that we have Baby 4 joining our family in May to deduce that I’m between 20 and 24 weeks pregnant.  Or maybe you just read it and didn’t do the math (I wouldn’t have).  But, considering that this, my final pregnancy, is already past the half-way mark (I’m 20w3d), I figured it was about time to fill y’all in on some of the details of this pregnancy.

I do have some posts that I was writing all along that I have back posted, and you can find them all here.  But, if you want a general “reader’s digest” summary, here you go.

Over the summer, Jim and I began to discuss the possibility of another pregnancy.  I can’t remember (and I’m too lazy to research back posts) if I divulged here on the blog that we spent most of Erin’s pregnancy thinking that I would have a tubal ligation during her c-section, only to find out in April (2010) that I would be unable to undergo the procedure at the time and place of her birth.  We considered other sterilization options later that year, but found that we weren’t at peace about the permanence of it, so…we opted to forego something drastic and continue our (very limited) option of non-hormonal birth control.  Ahem.  Which was working for us.

When we knew that we would most likely be traveling overseas at some point in the summer of 2012, we began to consider other birth control options.  I had discussed an IUD with my obgyn – an option I previously thought was not viable for me given my inability to use hormonal birth control methods.  She educated me otherwise, however, and we decided that if I were to have an IUD placed for at least 12 months, that I would be a candidate.  This decision was made in late August 2012, and we proceeded with the insurance preapproval paperwork.

There are a couple “chapters” of the story that I’ll skip for now, only because they are worthy of their own blog post(s), but let’s fast forward to the end of September.  I received notice from my doctor office that we’d been 100% approved for the Mirena, and that I was to schedule my surgery appointment for during my next menstrual cycle.

Which, if you’re paying attention at all, you’ll realize NEVER CAME.

On September 28, completely on a whim, and only because I’d tossed my cookies while cleaning up a mess from Erin, I ducked out of choir practice to purchase a dollar store pregnancy test.

And after I put Seth and Erin to bed, while Jim was away at a company dinner function, I did what I’ve done a dozen times before… 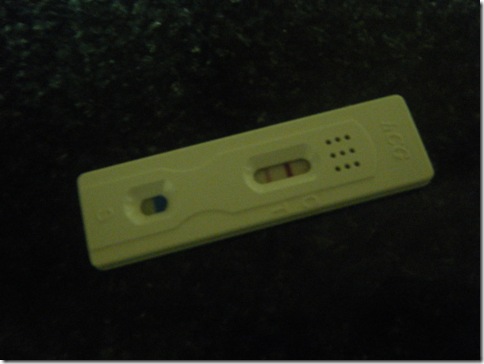 I had planned to spill the whole story thus far in this one post, but it is already long, so I’ll close for now, with promises to get you all up to speed in the coming days.  But I’ll end by saying that as surprised – no, shocked, really – as we were to learn of this baby-to-be, we could not be more eager and excited to meet this little person.  As much as I’m trying to relish each moment of this pregnancy, knowing that this time for SURE it is my last, I fight the urge to will May here more quickly.  I can’t wait to welcome this little person into our hearts and home.

I don't think I knew you ducked out of choir to get the test! (: Awwwwww

hooray! looking forward to reading the rest of the story...