Right out of the gate

2011 isn’t pulling any punches it seems.

Last week, I was struck with food poisoning, leaving me violently ill (and then subsequently, dehydrated and weak) for the better part of the week.  As I result, I was on two medications that are prohibitive to breastfeeding, which, as it turns out, was the final “nudge” I was waiting for to make weaning Erin a final reality. 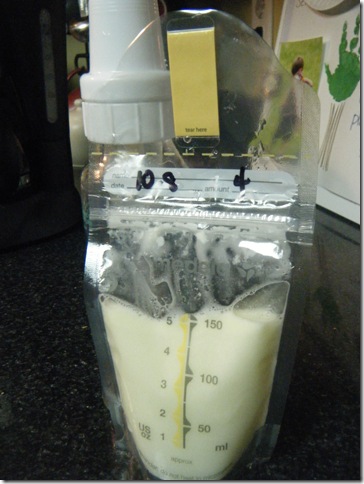 And as of bedtime tonight, I’ll have been pump-free for a week.  It’s surreal, really.  With the exception of the 6 or so weeks between when we lost our twins and conceived Duncan in 2008, I have been pregnant or nursing for 4 straight years.  That’s crazy.

The upside of being done with pumping is that I now have the freedom to sit in a surgical waiting room for hours at a time without need to relieve myself.  And I’ll have just such an opportunity this week, when Jim goes it for orthopedic surgery on his left hand.

You see, back in November, Jim participated in our church’s annual flag football Turkey Bowl, in which he injured his left hand.  We took precautions, and had X-rays taken.  We were told that nothing too serious had occurred, and that things should heal on their own.

When we returned from our holiday vacation, Jim went to see a specialist, who was oh-so-comforting with the news: “you’re here about a month too late.”  Translation (and long-story-short), Jim needs surgery to repair torn tendons in his left middle finger, followed by 16 weeks of physical therapy.

Oh, did I mention that in the course of this injury, the X-rays, the MRI, and surgery prep, that Jim’s wedding band needed to be cut off?

So, that has how we’ve rung in the new year.  A major hormonal shift for me (which has made me a peach to live with, I know) and painful surgery for Jim.

I hate to even post this; I know it’s such a downer of a post.  But….it’s our reality right now, and it’s part of the reason I’ve not been blogging much.  Let’s try to leave things on a happy note, though?  How’s this: 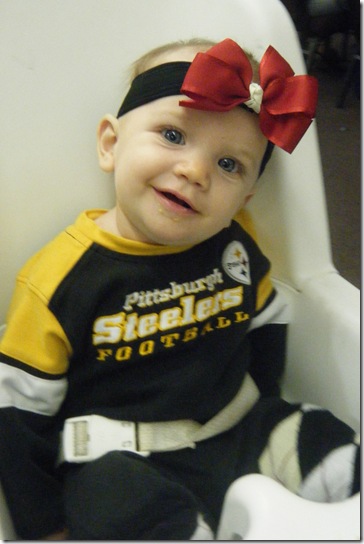 Erin is all set for the playoff games this weekend.  Go Steelers!

That BOW! Is CUTE! But boo to the rest of this (including the "go Steelers" thing, sorry pal). Hope Jim's recovery is quick and easy, and you can stay healthy now for a good long while!

That is just swell. Seriously? Surgery?! Good luck to all of you! Wish I could be there to at least bring you chocolate!

i was prego or nursing for nearly 5 yrs. i look back now and think did i really live that life. live might be a stretch, survive was more like it.

i'm sorry life has been so difficult. i wish i could sit with you in the waiting room listen to your heart, and tell you stories. look back at the chaos and hope forward knowing God was always present, provider, life-sustainer, love in the midst of it all.

may he use all this to draw you deeper into himself. i know (from experience) he will!

Oh man- the mom in me is more sad for you on the weaning part than the husband's hand part- how sad is that?! I'm sorry you got so sick. There is nothing worse than food poisoning. Ugh. So awful. But his hand injury sounds absolutely terrible too.
I'm glad you have such cute children to cheer you up through all of this. That picture is darling!