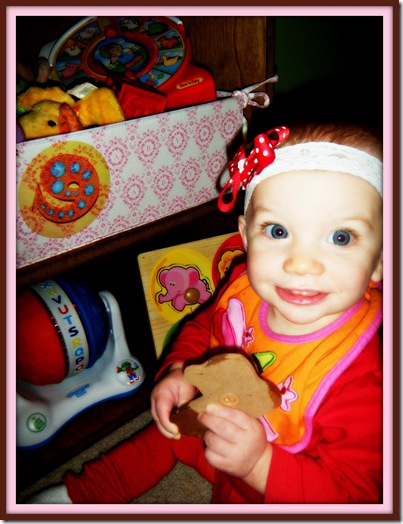 Thanks to a  week of tending to Erin’s double ear infection and pneumonia, you’d think I’d be nothing short of ecstatic to come out of the pediatrician’s office with a report that she is “perfect” and “completely healthy.”

And don’t get me wrong; I’m ridiculously thankful for that opinion of her doctor.

9 months means we lowered her crib mattress because she is valiantly trying to pull herself up to stand, and I’d prefer to not have her first success land her over the edge of the crib railing.

9 months means vigilant introduction of the sippy cup.  Which just goes against all that is in me, because, hello, she is a baby, and babies use bottles, and, um, no, she is not allowed to be creeping toward the ::gasp:: toddler stage…

Even her nine month picture mocks me with the threat of growing-up-before-my-very-eyesness: she still only has her front two bottom teeth, but the way she had her tongue curled and the way the light hit her face, the reflection makes it look like she has two top teeth, too.

9 months means we are only a quarter-turn around the sun from her turning (nooooooo!) ONE, and that just doesn’t seem possible….

Oh, well.  At least her stature is in my favor.

At only just over 15 lbs, she is in the whopping 3%, holding steady in 3 and 6 months clothes/onesies.   I tell you what, we are getting our money’s worth out of her clothes…it seems like she’s been wearing the same things since last summer!

I know watching my children grow and develop is all a part of being a mom.  But, man, does it do a number on the heartstrings.

Aw, Happy 9 months Erin!! I think she looks like Seth in that picture! And yes, I did mistake the tongue for her top teeth...sort of a glimpse into the near future, right?!
Gorgeous girl!
They do grow up too fast!!

I am just catching up on your blog since I was traveling the past week and just wanted to let you know that sweet Duncan has certainly not been forgotten! I thought I would share how Duncan changed my life...your honesty about your feelings surrounding his birth, the things that people said to comfort you and the things that hurt you have made me a better friend to other when facing similar situations. I always ask what the baby's name was, I am no longer afraid to ask mommies who have lost their babies about them, and I've been able to offer good advice to friends on how to give comfort to others facing that circumstance. And, I think of Duncan every time I'm facing that situation.

I meant to answer you about the sippy, I swear I did! We gave Vivi one around 6 months, I think? She didn't do much with it until ~9 months, and now she's a champ and tonight for the very first time, I gave her a pre-bed sippy instead of a pre-bed bottle. (SOB!)