If I’d only known…

I hate that I don’t have any photos to accompany this post.  We’re all moms with smartphones; you think we’d be used to whipping out the cameras to capture rare memorable moments.

For the past, oh, I don’t know, at least 4, maybe 5 years, Jim and some of his best friends…oh wait, I do have a picture for this! 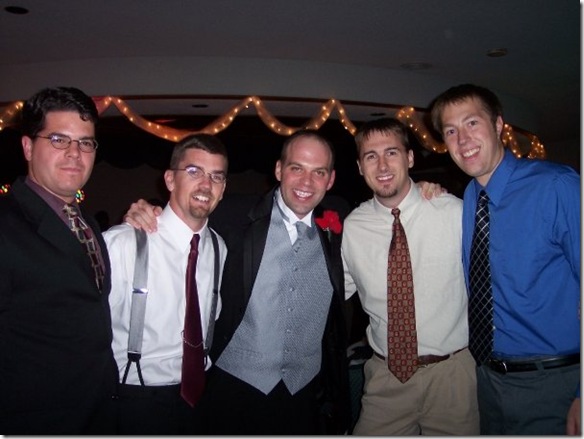 Anyways, these five guys have gathered in the Dayton/Cinci area for a annual guys’ weekend in the spring for the past half-decade.  It usually involves several hours of March Madness watching. golfing, Dave & Buster’s, Montgomery Inn, Bill’s Donuts, and general “boy stuff.”  And while we wives have never stood in the way of this tradition or begrudged our hard-working hubbys this getaway, we have gradually hinted at a reciprocal weekend for us girls.

And this past September, we actually pulled it off.

Four of us girls met up in West Chester, Ohio for a 48-hour retreat of shopping, eating, and girl time.  And we kept up pretty good pace with the boys when it comes to the eating department.

We met up late Friday afternoon at our hotel, and enjoyed a relaxing (kid-free!!!!) dinner at Bravo!, followed by a screening of the chic flick I Don’t Know How She Does It.  Saturday was full of outlet mall shopping, followed by uber-yumminess at the aforementioned Montgomery Inn, and then Graeter’s ice cream (which, really, wasn’t all that impressive; I’ll take my Handel’s any day).

Anyway, the point of this post actually isn’t about marking this weekend, though it is probably worth documenting, because the likelihood that we’ll manage it again any time soon is slim.

The funny part is this…

As we were headed to dinner Friday night, I marveled from the backseat of Nikki’s crossover, “I can’t believe we actually, finally, are doing this.  Then again, it’s the first time we haven’t had at least one of us pregnant or nursing in the last 5 years.”

And then Kristen, who strangely had insisted on sitting in the front seat due to a sudden onset of car-sickness, sheepishly says, “Well, that’s not exactly true…”  Hooray!  She was announcing to us that she was about 9 weeks pregnant with her third child.

Between dinner and our movie, as the four of us walked around the local shops, we each shared our current positions on our growing families.  Nikki and Jerry have one son, Jackson, and while they may want additional children, Nikki is pursing an administrative/principal certification and position within her school district so the timing is less than ideal to expand their family; Craig and Steph have three-year-old Aaron, sweet Zachary in heaven, and are pursuing Chinese adoption; Kristen had just shared her news that they were adding #3 to 4-yr-old Emily and 2-yr-old Aiden; and then there was me.

I remember saying to Stephanie, “I’m so glad Jim and I already have decided to put off any baby-making for at least the next year, because I think I’d have learned Kristen’s news, and totally gotten baby envy,” to which Kristen overheard and responded, “Yeah, just watch, I’ll call you in a couple months, and you’ll be pregnant.”

This was Friday night.

On Wednesday, I ducked out of choir practice early to pick up a Dollar Tree pregnancy test.

And, yes, we laughed a when I sent Kristen the text that said, “You know how you said you’d call in a couple months and I’d tell you I was pregnant?”  Little did I know that if I’d had any inclination that girls’ weekend, I’d have gotten a positive result on a pregnancy test….

Anyways.  Not my most eloquently written or profound blog post.

But given the emotion of this week, it’s good to reflect on how this final gestational journey of mine started.