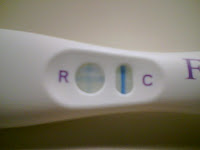 It was faint, but it was there.

The beginning of Seth.

It was only 2 months after our miscarriage, but I just knew that this was it. So, even though I was early, early, early (just barely 3 weeks pregnant), I decided to take an HPT (home pregnancy test), in the hopes that I'd be able to give Jim the best birthday present ever -- the news that he was going to be a father.

Sure enough....April 17, 2007, was the day day Seth became real to us. Oh, I know some would argue that he wasn't "real" until we saw a heartbeat, knew the gender, felt him kick, or even welcomed him in December. But I knew on this day last year that I was going to be a mommy. I've never been more happy to be right about something. ;)

And I have to add this in closing. As we are getting ready for bed last night, Jim says to me, "You're not going to pee on anything tomorrow, are you?" Heehehehe. Maybe next year.

You made my heart stop. I thought this was a BFP for THIS year! LOL Now that I've caught my breath...what a sweet story! :) Happy Birthday, Jim!