These are the people in my neighborhood

I grew up in a very stable neighborhood.  With few exceptions, I knew the same families in the same houses from the time I was three until the day we moved when I was twenty-four.

There was Dave the funeral director and his wife Julie, across the street to the left.  Their son Chad and I would play with his G. I. Joe action figures in their basement.  There were the Toland’s on the corner – the only two story house on our whole block.  And there was the lesbian couple across the street from them, with the loud dogs in the large fenced-in backyard.

There was a sense of familiarity; a sense of family.  And I hoped that I could convince Jim, my anti-subdivision hubby, that I’d like to raise our family in a similar environment.

And I think we’ve found that in our new Tennessee home.  We have been so blessed in the neighbor department.

Bill is right next door, and from the way Seth adores him, you’d think he hung the moon. Bill is so down to earth and generous.  If you see him firing up his grill, it’s pretty much assumed that you have an invite to dinner.  He has babysat for us, and we absolutely trust him with Seth.

On the other side of Bill are Matt and Christina, and their little girl Mady (Seth’s BFF).  We love to bounce decorating ideas off each other (our homes have the same floor plans), have dinner together when our respective spouses have business dinner plans on the same night, or borrow baking ingredients from one another in a pinch.  Just the other day, Christina showed up on my porch with a container of homemade chicken chowder: 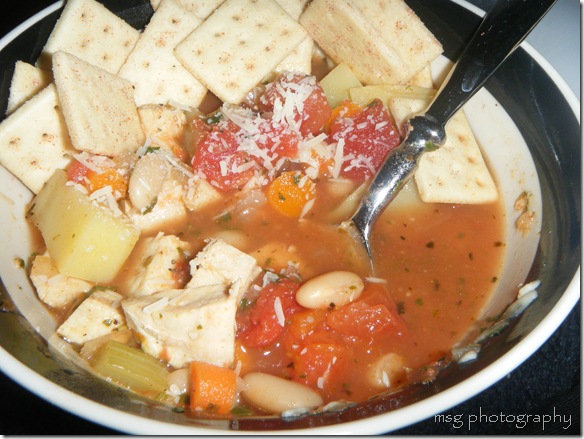 It was so good, and just what this sick girl needed.

But more than the soup, I have to say I appreciate the friendships more.  The freedom to call them in a pinch to borrow an onion, a shovel, a car, whatever.  To have them dial your number just so you can find your lost cell phone.  To ask them to mow their lawn so that your toddler is distracted for a hour. ;)  Yes, we have a dream to build a house on some land, someday.  But for now……this is the life.

Ahh, sounds fabulous. We don't know the names of anyone in our building because we never see anyone. When we buy a house, I want neighbors like yours! XO

You are so right. I had a similar scenario growing up. And now my kids know the other kids on the street, because all the children play together. But we only really interact with one of our neighbors on a regular basis. What you have sounds ideal!

Aww - you guys are the best! We are lucky to have such wonderful neighbors who are also terrific friends. :) Maddie sends her hugs too - she has been asking me for the last day now when she will see Seth and where "mommy" go (that's you!). I told her she better catch that runny rose first!

That is so cool! I wish we lived in a neighborhood like that.

I'm with you...our dream is to build a house on our own land, but for right now I'm enjoying the sidewalks, stopping to chat with the neighbors when we go on walks and delivering goodies at Christmas.

Glad you think so highly of your neighbors!
~Ashley

It's great to have wonderful neighbors. :)

All so true! We have great across the street neighbors. Their kids dog sit for us and I asked the mom (my friend) to come male-sit last night! Jason was sick- about to pass out- and I had to go to a meeting. I couldn't leave them with a sick daddy, so she came over, talked with my hubs who had his feet up so he wouldn't pass out and made chicken nuggets and mac and cheese for my kids. Now that's a neighbor!