Not just in Kansas

I’ve only been to five funerals in my life, which, for being almost thirty years old, doesn’t seem like a whole lot.  And for that, I’m grateful.  But here’s the interesting thing:

Of all the funerals I’ve been to – one, for an uncle; three, for grandparents – the first was for a woman I didn’t even know.

But I knew her granddaughter, and once upon a lifetime ago, we were the closest of friends. 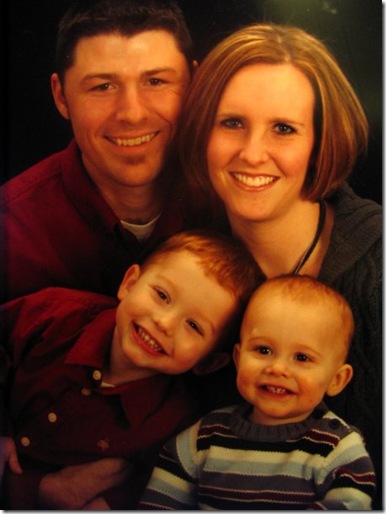 This is her (the granddaughter, that is), today, all grown up, with a beautiful family.  Isn’t she pretty?

Her name is Ambre, and we were in junior high when her grandmother died unexpectedly.  I remember, through the haze of time and overlapping memories, the questions and fears we had as young teenagers, experiencing death for the first time.

I remember riding in her parents van to the downtown church where the funeral mass was held.  I remember how cold and blistery it was that winter day.  And I remember most of all, coming across this message from Ambre in on of our high school yearbooks, years later:

“… and thank you for always being there.  I’ll never forget that you were the one to comfort me when my grandma died…”

Now, I don’t bring that up, at all, to pat myself on the back, but rather, to make a point, in that, sometimes, when the grief is overwhelming, all you can do for someone is just to BE THERE.

This is a picture of Ambre’s husband, Chad, with their nephew Hayden: 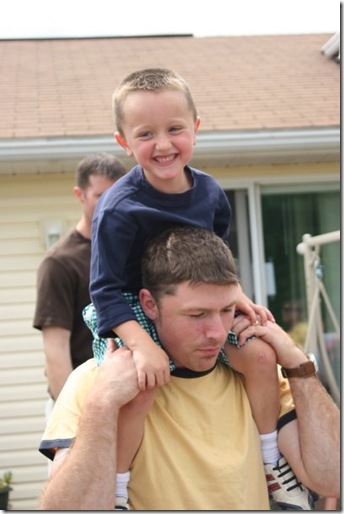 And this is a picture of Chad’s sister, Mary, and her daughter Maddie: 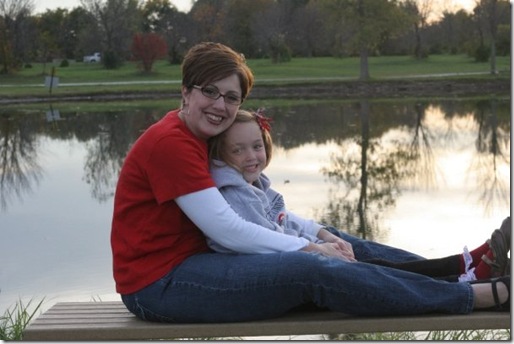 And this past Saturday, June 5th, a EF4 tornado ripped through the small Lake Township community where Mary and Hayden lived, and it took their lives.

Is this post voyeuristic in nature?  It’s not my intention.  Not at all.

But for the past week, my heart has been so heavy, and this is how I chose to introduce why.

Shortly before 11 p.m. on Saturday night, I was on the phone with my dad, forty miles to my northwest, watching up-to-the-minute television coverage of a line of thunderstorms heading through northwest Ohio.  Even as tornado sirens screamed outside my inlaw’s front door, my father said to me: “…well, I’m sure nothing will happen.  I’ll see you tomorrow.”  And we hung up.

Within a moment of setting down my cell phone, I heard the tornado’s force slam into my husband’s alma mater, a mere mile away.

The photos I’ve included below are used from various public sites, and showcase, in no particular order, only a hint of the destruction I’ve been witness to in the last week. 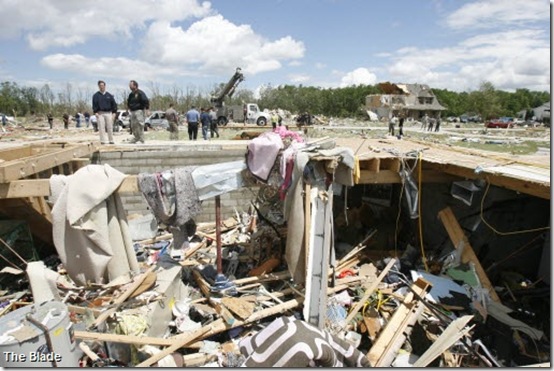 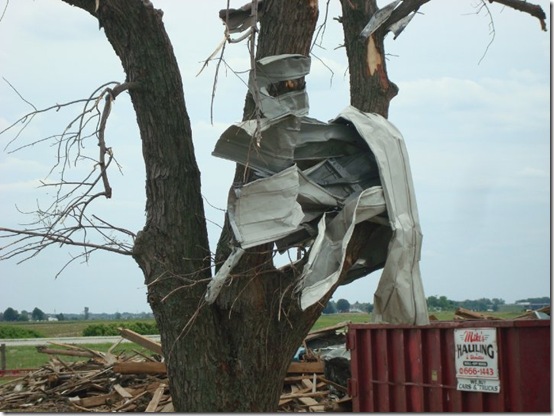 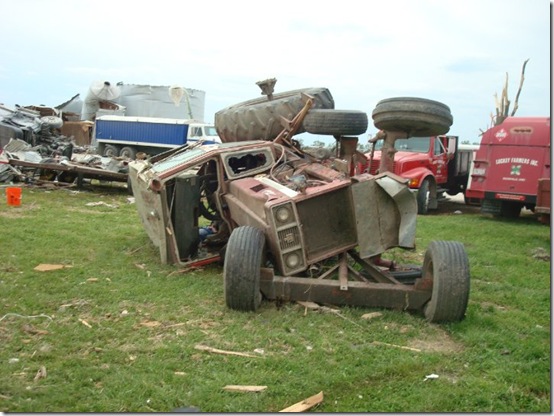 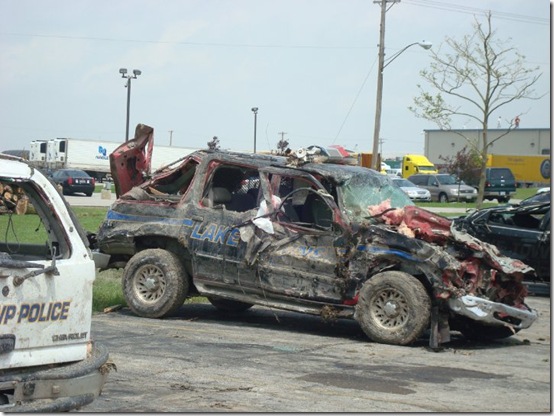 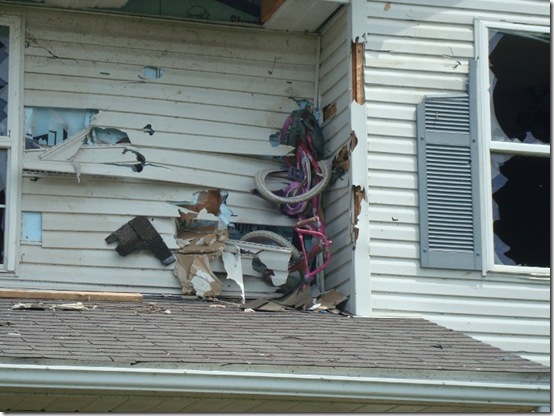 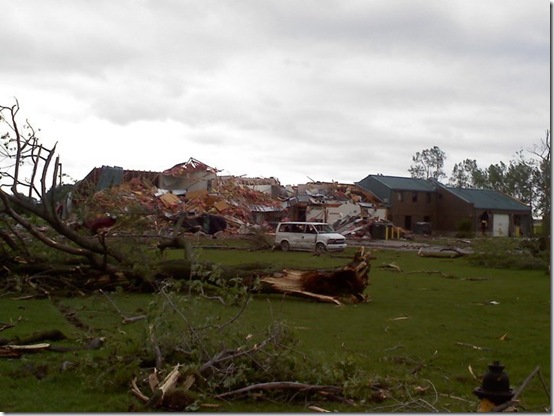 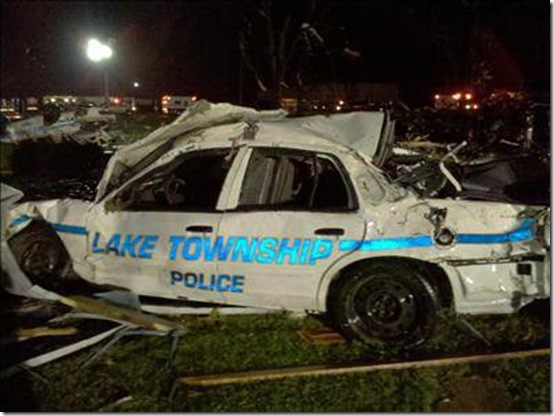 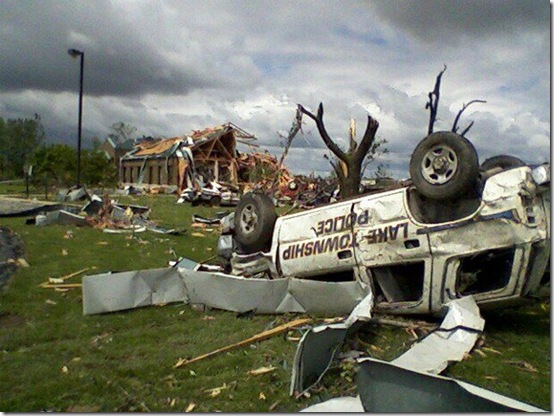 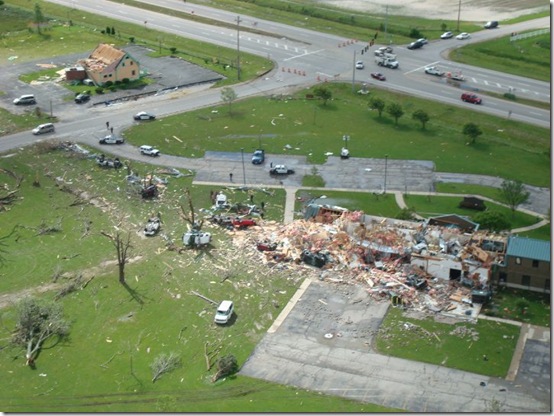 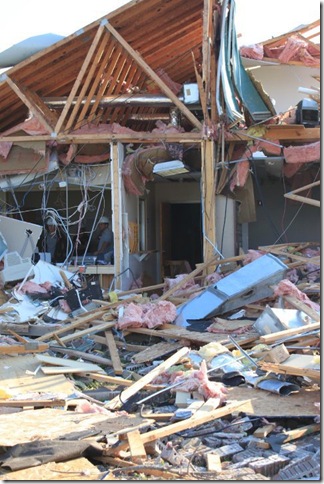 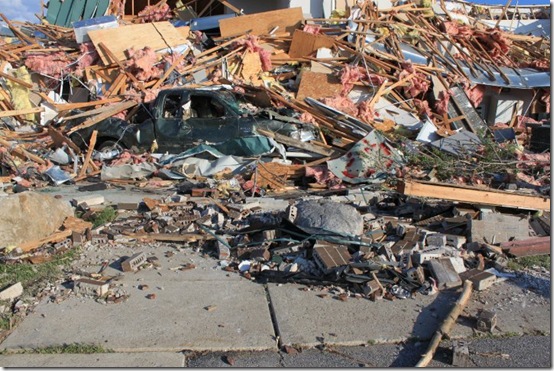 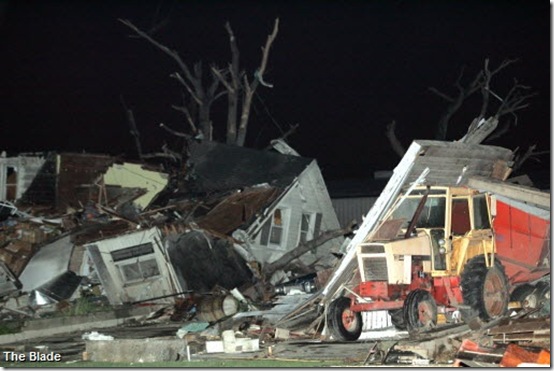 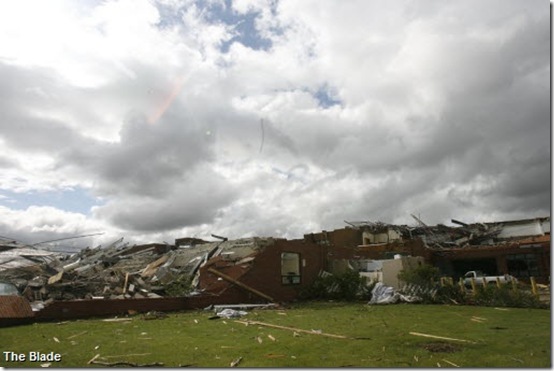 These are not just photos; they are memories.

I remember the taste of the hamburger I ordered when Jim and I last had dinner with his parent’s at this restaurant: 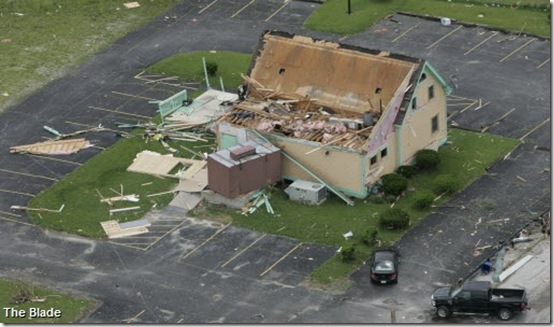 You’ve heard me write on numerous occasions about our friends Doug and Sara.  They hosted their firstborn’s first birthday party at the pavillion and playground that used to be in this photo: 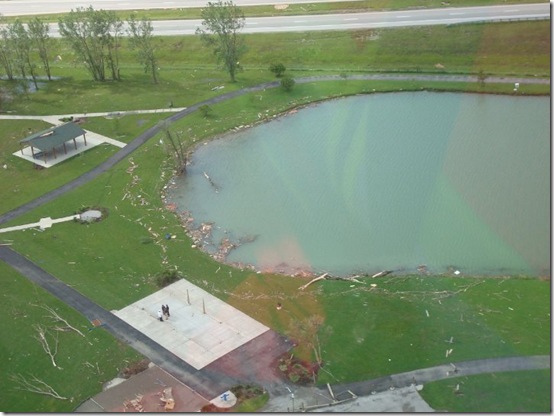 Every time we head out to get ice cream at Paradise, we drive by this cornfield: 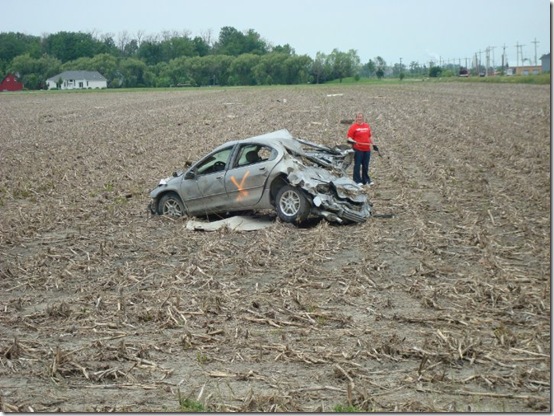 A diploma just like this, but with Jim’s name inside, is tucked away in a box in Seth’s closet: 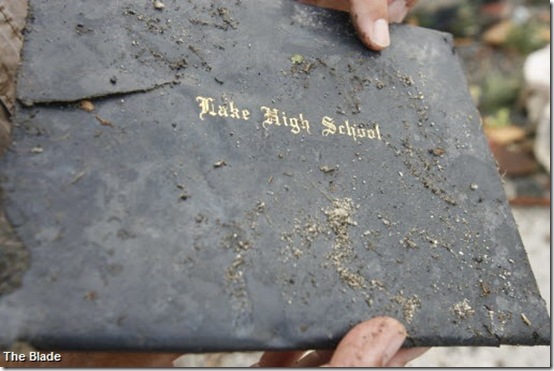 Our friend Rick – a groomsman in our wedding! – and his wife Sarah live with their two young daughters in a neighborhood struck by the twister.  You think it won’t happen to someone you love.  It does: 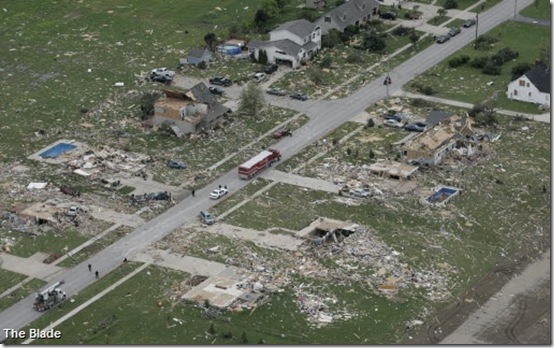 Yesterday, Mary’s sister Amy walked into the dry cleaner’s where my mother-in-law works, and asked her to clean and preserve the wedding gown they’d found amid the rubble of Mary’s house.  It had belonged to their mother, and Amy wanted to make sure Mary’s daughter Maddie would have it.  When Linda told me this when she came home, my heart broke all over again.

I’ve been trying all week to formulate this post – to put into words the terror of Saturday night, the fatigue of Sunday morning, and the sadness of the days to follow as the death toll rose and the piles of debris grew.  And I can’t.

For all the training of my publishing education; for all the eloquence I’ve been able to put into posts about my own tragedy and loss; for all the vocabulary I’ve built up over the years of reading and writing… words fail me.

So, today, I will let my tears and silence speak for me.

I will change out of my shorts and tank top, and I’ll head up the street to the funeral home, and I’ll put my arms around a girl-turned-woman I’ve known and loved for a lifetime, and I’ll just be there.

I don’t know what else to do.

Oh Monica, I just want you to know that you are all in my prayers.

*hugs* I hope you feel a tiny bit better after blogging about it...it didn't work for me, but this week has been that way. Love you, Mon & I'm SO glad that y'all are safe.

My thoughts and prayers are with everyone affected by this disaster. We now live an hour and a half north of Toledo, but both my and my husbands family are there. We happened to be in T-town visiting when all of this happened. A very scary night with devastating results.

Mon, I am so sorry for the tragedy you and those you love are experiencing. I am so thankful you are safe! I am loving on you...been thinking about you all week.

Mary @ Giving Up On Perfect said...

Monica, that is heartbreaking. I’m so sorry to hear about your friends and all their loss. What devastation those pictures – and your words – show! A really bad tornado hit my town 7 years ago, right after we bought our house. It was so scary and so sad. We were kept safe, thank God, but not everyone was. Tornado season scares the youknowwhat out of me, and this is why. I’ll pray for you and your friends.

I'm so very sorry. Keeping everyone in my prayers.

Oh my...I had NO IDEA you were right there literally in the middle of this...oh my sweet friend, I don't know what to say, except I love you.

The devestation in the Northwest Ohio region is heartbreaking. We left a wedding reception at Valleywood Golf Club in the Swanton area just minutes before the storms swept through. We drove through rain, hail, and then eerie quiet in the dark. I prayed and Tim drove in the opposite direction of the storm's track. When we arrived home safely, we began to see hints of the devestation on the news, and the realization of the severity of the tornado started to sink in.

Praying for you...for all the families whose lives were changed in an instant. You are right. We don't think it can happen to us or to someone we know/love. It can and it does.

We were up there that weekend of the storm. It shocked me to hear the severity of it. I'm praying for all of those affected by this storm.

Two things struck me about this post:
1) "You never think it will happen to someone you know. It does." You're right.
2) Nature is a powerful thing.

My heart is heavy with yours for this tragedy.

Mon- I saw on yahoo that the husband died as well. Please send our thoughts and prayers to this family and let us know if there is anything that we can do for the little girl who survived.

My thoughts are prayers are with you and all that have been affected but this disaster. I'm so glad that you are your family are ok.

This has been a horrible spring for tornadoes. That same week (same night?) they hit very close to my in-laws in Illinois. We saw some of the devastation on our drive to their house the next day.
My thoughts and prayers are with you and your family, your friends, and everyone affected.
I'm glad you are safe. (((hugs)))

praying for you, your friend and family

Oh my. These pictures are devastating. I cannot imagine what you all experienced. I am so sorry for the loss of lives and the loss of memories.

often, just being there is the most blessed gift we can give (in addition to praying).

may God cover each family, and magnify his mercy on each one. may he provide, lavish his love, show himself, and in his mysterious way be glorified. may he rebuild not only the town, but each person in his grace, peace, and love. in jesus mighty name, amen.