I didn’t mean to take Labor Day off from McFatty Monday.  But, somehow, it happened.  Oops.

Yea, me!  I was focused again, after the weeks of yo-yoing and disappointment.  I rocked Week 9.

Week 10.  Which can be summed up in a phrase that I think epitomizes my struggles:

I read a book over the course of Week 10 – a just-for-fun book, not a diet and nutrition book – but I did pick up on something the author was using, and it was that phrase.  She was using it as non-dialogue filler, just to help develop a scene, but three times that I can recall off the top of my head, she used the phrase:

Where do I sign up for a cameo appearance in that novel, because I’d fit right in!

Seriously, that is me.  Mindless snacking, just because it’s there.  One more trip to the pantry, just because I know something yummy is in there.  It’s horrible, and I want it to STOP!

So, seeing as how I’m not going to get even remotely close to my 30 x0 30 goal (heck, I’m not even going to see the flip side of Phase Two), I’m just recommitting, again, to be more mindful, and to nix the snacking in the bud.  Because I’m finding that just because the snack is under 100 calories, or even if it’s healthy, if it’s CONSTANT, I’m still not going to lose.

Jim and I will be heading to Las Vegas for a conference in a couple months, and I’m kind of using that as a new motivator.  That, and this picture: 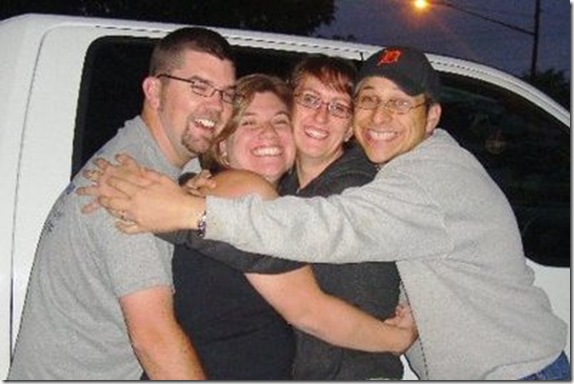 I love these people, and I love the happiness in this shot.

But it’s fuzzy because it is so cropped, and it’s so cropped because I look AWFUL in it.  It makes me really, really sad to see my chubby face, and flabby arms (which, whew, is it least somewhat hidden thanks to Doug and Sara’s arms), and I hate that Sara and I have been trying ALL STINKIN’ SUMMER to get this picture of the four of us….and now that we have it, I’m ashamed of it.

Maybe that’s just my vanity speaking, but I need a good kick in the pants.  Because 6 weeks ago, I weighed 10 lbs less than I do right now.  So, no more “I just had a baby excuses.”  I did this to myself, and – this’ll make Jim laugh – in the words of Carrie Underwood….

I wanna UNDO IT.

You can do it!

We all have our setbacks. & I think you are beautiful, inside & out.

I was laughing because I spent the last week reading that same set of books! I LOVE Nora Roberts and must read too many of her books to be able to pick it out like that :)

Keep your chin up and hang in there. Even though the numbers may fluctuate, you're doing it and you'll get there!

you can do it.

and i think you are beautiful just as your are. i like that you have an attitude of perseverance! keep that up.

You stop. You're beautiful! *hugs*

I'm right there with you. Mindless snacking. I just have to make sure there is no junk food in our house because if there is, I will eat it. 7 months post-baby and I still have 8 pounds to lose to get to pre-pregnancy weight. Not to mention the 15 additional pounds I'd like to lose. UGH! Good luck to you!

p.s. I've been singing "NA NA NA NA NAAA NA..." since I read this post. Also, something that may give you a "kick in the pants." THIS is our before picture...Seth's birthday party? Our "work in progress" picture with all sorts of improvements. i'm not happy with me right now either. Love you, girl!