As if I needed to stick another needle in my belly

Updated:  Amnio results showed that the baby’s lungs are still immature, and that if delivered, she would be in the NICU with breathing assistance.  No decisions have been made at this point, other than to wait.  I will know more by the middle of next week.

I’m disappointed, but her safety is my main concern.  So…..we’ll just sit tight and see what next week holds.  Maybe she’ll be a May flower after all.

If it weren’t so late at night, after so long a day, I’d make myself take a picture of the 2.5 gallon freezer bag that is chock full of used Lovenox syringes, just for the sake of photographic impact. 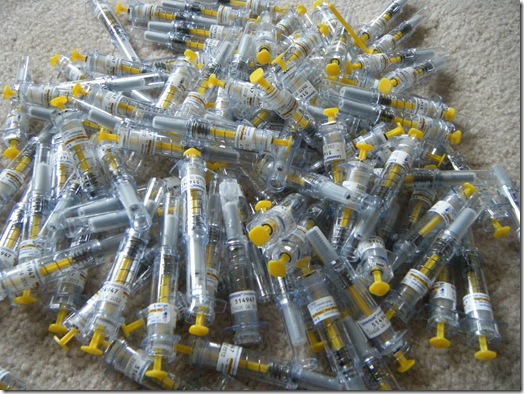 Times THREE.  This shot was taken at the end of the first trimester.  21 more weeks, times 7 shots a week…..

Yeah.  That’s a lot of poking and prodding, lemme tell you.

Thursday, I had an even more important needle stuck into me.  For an amniocentesis.

If Baby Girl’s measurements at this Thursday’s ultrasound had confirmed the downward trending, and dipped her below the “official” cutoff percentile for IUGR, the plan was to proceed with a c-section on Monday, April 26.

Plans were made, bags were packed, fights were booked.  Names were even discussed.  Oh, yes, people.  We meant business.

Imagine the surprise, then, when Baby Girl showed off some on-target 5 lb., 12 oz. measurements that landed her cute little toosh firmly back in the 40%.  Which, even taking into consideration that these ultrasounds can be up to a pound off, especially this late in pregnancy, took her well clear of the IUGR label we were anticipating.

So.  Now what?  Delivery on Monday was no longer a given.  In fact, delivery on Monday would birth her shy of even 36 weeks gestation, which gave us all pause.  It’s a no brainer to pull her out if her placenta is deteriorating…..but if it’s not, the decision to rush her birth could jeopardize her lung ability.

The purpose of the test was merely to extract enough amniotic fluid from Baby Girl’s bag of waters to determine if her lungs are yet mature.  Most likely, tested as they were at 35w2d, they will NOT be; however, amnios for this purpose aren’t Pass/Fail.  We will be able to determine a degree of maturity, so, hopefully, her lungs will be close enough to term to validate a delivery in a week – at 36w2d.

Now, there is still the possibility that her lungs ARE ready, and we can deliver on Monday as planned, and honestly, that is the desire of my heart.  I have been having a lot of emotional struggles in the past few days; my blood pressure is up (still great for me, but up from where it’s been), my weight is again down, and I’ve been having multiple daily panic attacks.  I am ready beyond words to have her safely out of the womb and, if needed, under competent hands-on medical care.  So, nothing would make me happier than hearing that her lungs ARE ready, and that she can come out and play on Monday.

Hope for that with me, will you?

I will try to update this post when I get the amnio results from my ob’s office this afternoon.

Oh boy do those syringes bring back memories :)
Mine were a bit prettier..unless you're a yellow fan..mine were purple. I was doing 2 a day, then 3 a day for a month & back down to 2, until I was switched to heparin @ 36 wks. Then it was 3 a day & those syrninges aren't pretty at all - they're very plain…hehe..
If you do get put past the 36 wks are you they going to switch you over to heparin? Most of what I've see online & chat rooms, is that they do switch over…but I know every dr is different.. Either way, praying for a healthy & safe birth for your baby girl!

Ugh! I have been on twice a day Lovenox shots since after I gave birth four weeks ago for a blood clot I got in my leg post partum. My hematologist wants me on them twice a day for three more months. UGH! At least I have a nice flabby belly that makes it easier. lol

I will be praying for Baby Girl and for you. Can't wait to "meet" her but definitely want her here healthy! :)

Big (((hugs))) Monica!! You are so strong to go through all this for your sweet girl. I hope you get good results so you can hold her in your arms soon. Hang in there!

I am hoping for excellent results for you guys, Monica! Looking forword to your update later today!

Hoping and praying, M. Thanks for keeping me in the loop, hope you could feel those prayers coming from TX yesterday! Will be watching for an update.

I want to kick someone in the head, Mon. Seriously?! What a bunch of crap. *BIGHUGS* Please call me if you want to chat or vent or whatever. Love you, girl! Just do what you can & try to chillax.

Love you and am thinking about you! So glad she is safely still cooking, but I know you want her to be safely cooked soon!

i'm glad bg is growing, but sorry she doesn't get to be born on monday. hugs to you, monica. it won't be long now!

When did you have to start the Lovenox shots...as soon as you found out you were pregnant or later on in the pregnancy? I have Factor V Leiden so my doc wants me to take those shots if I get pregnant again.

Hi,
I have twin boys who are now 3 1/2. I developed pre-e around 34 weeks and the boys were born a week later. Tony weighed 3 lbs 12 ounces. I am now nearly 23 weeks with my third son. I am so sorry for the loss of your son Duncan- frankly, it makes me nervous about my own son. Is he at risk for developing IUGR? What are some of the warning signs that I need to be alerted to? Should I be seeing a high risk OB instead of my normal OB? If you could please email me at randi@chrisandrandi.us , it would be so appreciated. Thank you!
Randi Booth

Perhaps next week she will be ready! Praying she keeps on growing and those lungs keep on maturing!