Last week at school, Seth went a little Evil Kneivel on his teachers and did a face plant right into a rocking chair.

Thankfully, one of the staff members where Seth attends Mother’s Day Out is also a trained EMT, so he was able to get immediate medical attention.  The consensus was that his nose was not broken and that he most likely did not have a concussion.

Which is not to say that he didn’t need a good portion of TLC from both mom and dad when he came home.

The accident happened about 12:30, and we decided to keep Seth up through his nap time, which was not easy, seeing as he was the usual amount of just-plain-tired, plus the extra dose of exhausted from the fall.  But we just popped in Finding Nemo and curled up on the couch while Daddy satellite-worked from the dining room.

By 7:00, our stunt guy was down for the count.  Tylenol and a warm bath put him in such a deep sleep that he didn’t even budge when we decided to ice down his schnoz.

Jim didn’t look too thrilled when I came out with the icepack wrapped in a pink cloth, but, hey, infant washcloths are what they are for a reason – it was the perfect thickness, and I’m sure it won’t be the last time one of my children has to make do with his/her sibling’s toiletries. 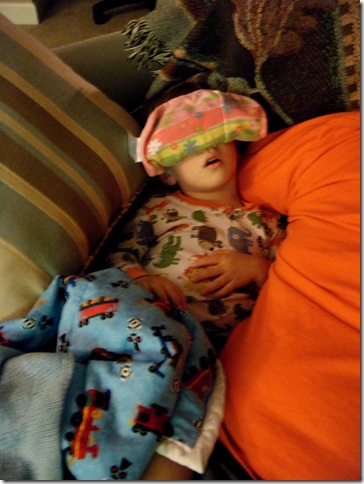 I’ve not been able to get a good picture of the final bruising color pallet on Seth’s face, but you can just imagine: purplish-yellowigh-gray.  He has endured it like a champ, though!  I think we’re in the final days of discoloration, and by the time Baby Sister makes her arrival, he should be back to his normal, Caucasian-colored self.

Awww, man! That's a tough fall. But I'm glad he was out like a light. Nemo can work wonders. :)

Awwww...poor little guy! They sure like to scare their mommas, huh?