Yes, I did rephrase some of the original content of this post.  It was written too hastily; I made some ignorant and poorly-worded statements; and I chose to remove those statements not out of cowardice or an attempt to “sweep my error under the rug,” but in an attempt to do no further harm.

I’m very openly admitting I spoke out of line, and I apologize to those of you who were offended. However, I do not appreciate being misquoted.  I never referenced a “conspiracy;” I chose the word “alliance,” which I stand by.  it takes very little effort and research to see that there is indeed a “you scratch my back, I’ll scratch yours” relationship going on between the voters supporting the top schools in the Kohl’s campaign.

This is my blog.  If you were offended, it is your prerogative to choose not to return to read further posts.  I will respect that.  I would ask of you the same courtesy to refrain from carrying on a conversation within the comments from the comfort and veil of anonymity.

If you’ve read my blog for any amount of time, you probably remember this post about the F4 tornado that destroyed Jim’s alma mater in June. 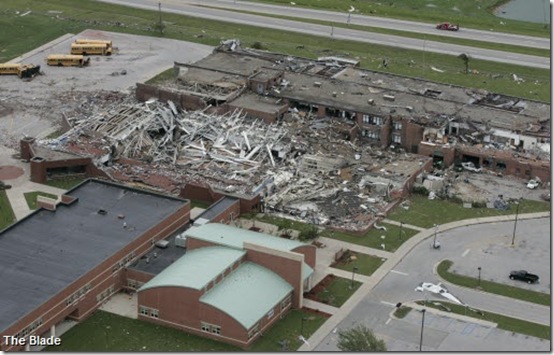 As you may also know, Kohl’s Department Store is currently sponsoring a Kohl’s Cares campaign to provide a total of $10 million in funding to 20 schools nationwide.  For the first month that this campaign was running, Lake High School was in 1st place – and you can imagine the morale boost this was to our community.

How has this happened?  Well, from all appearances, it is due to an overwhelming tidal wave of recent votes for private and parochial schools.  Go ahead.  Click to the page of top schools, and see how long it takes you to find a public school.

Now, I’ll be the first to admit, the feelings I’m having are less than charitable, and totally not in keeping with the spirit in which Kohl’s is running this campaign.

But it’s really, really hard not to think, “But we need it MORE!”

Sure, any school can utilize and benefit from a free $500,000.  But I’d venture to say the other 19 schools in the top 20 are thinking of this money in terms of music and art and sports programs – not WALLS and ROOFS and PARKING LOTS and BUSES like Lake is.

And vote for Lake High School, Milbury, OH.  You can vote for Lake up to 5 times until Friday, Sept. 3.  And if you feel led (please!  feel led!), pass this news and link to your other friends and family who may not even be aware of this campaign.

Because I promise you, getting knocked out of the running for this HUGE blessing of funding will be merely adding insult to injury to a community already hurting.  After being in the lead for so long…well, let’s just say, we’re feeling a little bit like the little wimpy kid getting ganged up on by the big bullies.

Will you stick up for us?

Monica,
My school is in the running, too. I'll send you an email with the details--but wanted you to know we're pulling for you guys!

Thanks so much, Mon & thank you to all your readers that voted. *hugs*

I voted for you guys 5 times and reposted this on facebook. I'm pulling for your school!!!!

I gave my five votes, Mon! Thanks for sharing about this. Praying for Lake and for God's provision...whatever avenue He chooses.

To the anonymous Hebrew reader. Thank you for your comment I hope your school is in the top 20 and wins a half a million dollars.

There is nothing negtive said about any of the other schools that are in the top 20. Just the $500,000 would be used a little differently than at Lake (if they won).

I'm pretty sure she said "Hebrew and Jewish Conspiracy"... you know.. that's how our people are..It was rude and she took it down. But it wasn't a very Christian thought to have or to post.