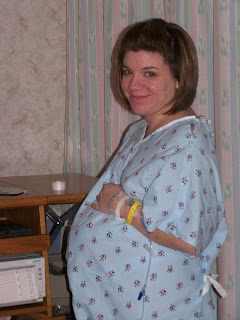 Despite the rough night of Cervidil and numerous interruptions from my night nurse Candy, this (picture at left) is pretty much how I looked when they wheeled me from my home-away-from-home on the antepartum wing to the labor and delivery suite (L&D) on the other side of the 3rd floor. Not too shabby for 37 weeks pregnant and all drugged up, ready to push out a baby in 10 hours...But at the same time, I look at this shot, and I have to admit, I think: wow, I really look HUGE!

My nurse on the antepartum wing had attempted to remove the Cervidil, but was unsuccessful, and that was the first order of business when we got to L&D about 8:30. I knew Dr. Gibbs had wanted the Pitocin drip started as close to 8 o'clock as possible, so we were already "off schedule." But anyways....an L&D nurse was able to retrieve the Cervidil, Dr. Gibbs requested that I eat a small bowl of Cheerios to help me transition into labor, and the Pitocin drip was started to speed up my contractions. 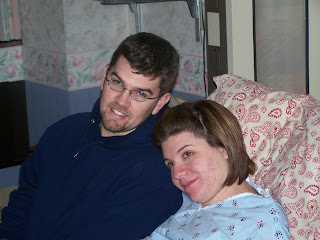 As you can see from the additional pictures, things stayed pretty calm for a while...once our parents showed up (cameras in hand to document the events of the day), Jim set up my laptop so we could check e-mail, etc......Okay, I'll admit it: we set it up mostly so I could keep in touch with my on-line chat room"girls" (see "What I Really Do All Day" post from a couple months ago).

The nurses on the L&D wing seemed a lot more laid back than my antepartum nurses....and I have to say, this concerned me initially. I mean, c'mon: I'm trying to have a baby here. Could you maybe seem more interested in what my monitor is spewing out? 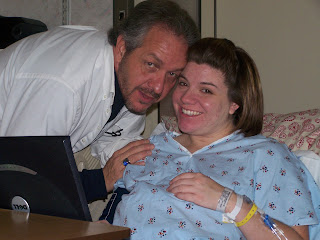 I guess this is a little unfair to them; looking back, I'm convinced that they were adequately concerned with and observant of my progress. Still, I was relieved when I learned that Dr. Gibbs had requested a midwife come in to break my water to speed things up. With my 6 o'clock deadline looming, I welcomed anything that might get things going and get Seth here faster.


Ooh....I have to insert a little sidebar here. Before the midwife came in, we had another visitor: a hospital chaplain. You may think this was either normal or strange, depending on your exposure to how hospital chaplains work. For me, I wasn't surprised, but I wasn't exactly thrilled, either. Let me explain.


I had been seeing this particular chaplain -- let's call her Marion -- for several days now. She was nice enough, and I didn't mind her company for the 10 or 15 minutes that she would visit my room. Earlier in the week, however, something happened that I never expected to backfire on me, but....it did. You may know that for the longest time, Jim and I had not named Seth....we weren't withholding his name from family and friends; we really hadn't decided. But the Sunday before his birth, Jim and I finally decided "Sprout's" name, but then, yes, decided to keep it a surprise until his birth. At one point the following week, however, in a moment of weakness and vulnerability, I shared the news with Marion, the chaplain. She asked, and although I explained that we were keeping it a surprise, she had said that she wanted to pray for the three of us by name, and I thought, "what can it hurt?" So I told her. Fast forward back to the L&D suite. So, here we all all: me, Jim, and our parents, all trying to make small talk with Marion as I'm riding out my contractions, and.....you guessed it. In response to someone commenting on how ready we all were to have the day over and for everyone to be safe and sound, Marion chimes in: "Well, of course....and you're all just so ready to meet baby Seth." I immediately went numb, then started sobbing. I had not bothered to tell Jim I'd told her; I really never gave it a second thought. But here it was: his name, out in the open, announced by a stranger. I was devastated that I'd robbed Jim of the moment of introducing his son to the world in the manner in which we'd hoped for. He quietly asked Marion to leave, and just held me. I kept saying "I'm sorry, I'm sorry" over and over, and although I know he was disappointed, Jim just held me and kept saying "It's okay." I had to ask our parents to leave, I was so upset. My blood pressure was spiking, and my contractions were intensifying. The nurses came running and we had to explain what happened...it was such a mess.


Or so I thought. Come to find out -- and I don't know how this was so, other than to say there were angels in the room -- none of our parents heard her. Somehow, she blurted Seth's name, but only Jim and I heard her say it. I was so relieved -- relieved to give Jim his moment back; relieved to know that no one else in the world knew, and there was no way the beans could be spilled and further.


Okay. Back to my labor. The midwife arrived right about 10 o'clock, chipper and soothing and ready to stick me with what looked like a crocheting needle. Ugh. She wanted to check me first, just to see how much progress I'd made on the Pitocin alone in the 90 minutes it'd been flowing. As she felt around my cervix, the expression on her face became unreadable. She turned to my L&D nurse and in the most puzzled tone asked, "Is this baby breech?" I had to smile....of course he wasn't breech. We'd just had an ultrasound, and both Dr. Gibbs and the midwife who inserted the Cervidil commented on Seth's position, just the day before. Still, the midwife was convinced she felt something other than a head. A hand, maybe? I told her that must be it -- after all, how many ultrasound pictures did we have of Seth with his arms up alongside his head? But she wanted to do an ultrasound, just to make sure, as continuing an induction with a breech baby is....well, let's just say it's not a good idea.


So, they wheeled in the ultrasound cart, and after a scuffle with the machine mechanics that necessitated an additional nurse and an on-call obgyn coming in to join the party, I watched all the faces around the foot of my bed fall -- Jim, our parents, my nurses, and the midwife -- as the screen revealed that our little boy was indeed breech. 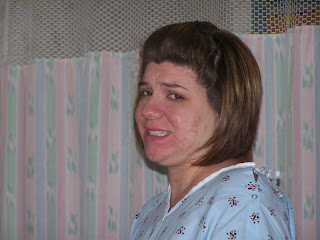 And all of a sudden, it became clear why Thursday night had been so miserable: Seth was doing incredible acrobatics in an attempt -- successful, it would seem -- to somersault himself right-side-up. The end result: an inevitable C-section.

Dr. Gibbs came by during rounds about noon. I'll never forget the look on his face as he entered the room.

"You must have an audience with God," he says. "In 21 years of practicing obstetrics, I've never had this happen."

I replied that I did not pray for a C-section -- I merely prayed that the choice to either rush a labor or operate would be clear cut.

Unfortunately, because I'd had that bowl of Cheerios for breakfast, we now had to wait for my digestive system to empty before we could proceed with the delivery. Tentatively, the operation would happen at 4:30. As soon as Dr. Gibbs left, the nurses stopped the Pitocin drip -- but not quite in time. I was already in a pretty decent labor pattern. They gave me a shot of Nubaine (YUCK!!!) to help with the pain, and as soon as I started to drift off into la-la land, Jim took our parents to the cafeteria for lunch. By the time they returned, it was drawing closer to go-time, and I was working myself into a nice state of panic. 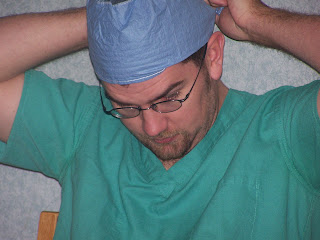 By 4:45, everyone was ready to go -- in scrubs, watching the clock. My nurse came in with the most apologetic look on her face, and explained that one of the anesthesiologists was concerned with a possible placental hemorrhage, and was requesting additional blood draws. (I knew, even in the moment, that this was necessary, but seriously?! Can I please just go have my baby!?) At this point, I'm miserable. I'm in labor, and I'm scared to death, and I began repeating what became my mantra for the next hour: "I don't want to do this. I don't want to do this."

Long story short. We wait. The phlebotomist comes in, draws the blood, rushes out. We wait. And finally, they come to get Jim and I. Except we only go about 5 feet from the room, and they tell Jim, "Daddy waits here."

To Be Continued...Coming Soon...Part III: The C-Section
Posted by The Writer Chic at Sunday, December 23, 2007

Hey Monica, this is Sarah (Roberts) Hall. I met you at PCC...I was good friends with Wendy O'Hara and was in her room all the time when you guys were roommates :) Hopefully you remember me :P Anyway, I saw your blog on ringo and just wanted to say Congratulations on the birth of Seth!! He is gorgeous!

man, this is suspenseful! lol you're killing me here! :) at least i know it has a happy ending though! :) hope you had a great first Christmas with Seth! i'm so glad the moment of his name didn't get ruined, that was cool! :)