We pulled into the ambulance bay at Monroe Carrell Jr. Children’s Hospital at Vanderbilt in record time, where Jim and neighbor Stephen were waiting for us.  Sweet Beau cradled Seth in his arms as he stepped from the rescue squad, making sure to wrap the thick cotton blanket snugly around his bare legs.  There was something reassuring about seeing Seth held securely in the grasp of this young EMT who I felt like I’d gotten to know.

(Something that I failed to mention earlier is that this EMT team of Beau and “Happy” were the same two technicians who accompanied me and Duncan on our whirlwind ambulance ride back in April.  I had joked with the guys earlier that night that I was just going to start requesting them by name if we had need to call 911 in the future.)

Beau rushed Seth through the double doors, while Jim and I, in true bureaucratic fashion, got hung up at the registration desk.  When we finished passing along the requisite insurance and guardian information, we set off down the hall to find our son….which wasn’t hard to do, because he was sitting on a gurney in the middle of the hallway.

Initially, I was irritated: post-seizure toddler, very pregnant mommy, and puking daddy, all left out in the hallway with no privacy or seat in sight.  But then I reigned in my emotions, and realized that it was a GOOD thing that we weren’t being viewed as “worthy” of a room – and I’m not being sarcastic.  I truly realized that I’d rather be in the hall, holding Seth’s hand, than in a room, with a dozen medical personnel hovered over my baby instead of me.

So, we pulled up a couple chairs next to Seth’s crib/cage/stretcher, positioned ourselves strategically next to the bathroom (for the sake of Jim’s overwrought digestive system), and settled in for a wait.

As the moments passed, the commotion of the emergency room seemed to draw Seth out of his lethargy.  As nurses tried to check his vitals, he started to show signs of annoyance – a truly welcome sight!  He kept pulling away from the nurses, and being to call for mommy.  What a beautiful sound!

His temperature continued to fluctuate, but we began to get good reports.  His ears and lungs were clear; his reflexes were good; and his eye contact was returning to normal.  Within the hour, he was guzzling apple juice (100% pure apple juice, mind you – full of yummy, natural sugar.  At 9 p.m.  Never again.), and playing with toy race cars brought to him by a sweet teenage volunteer.

We met with two different doctors who reassured us that we had done the right thing in calling 911 during Seth’s seizure.  All signs pointed to the following diagnosis: febrile seizure.  I’ve linked to a very comprehensive, user-friendly article from the Mayo Clinic that is sure to answer any questions you may have regarding these seizures better than I could ever hope to.  In layman’s terms, though, I’ll say, Seth had a sudden, drastic rise in temperature, most likely due to his body’s attempt to ward off an infection (possibly the same bug Jim had?), and as a result, had a minor seizure with no lasting effects or damage.

We were told that Seth is perhaps 30% more likely to have another seizure, similar in severity and duration, at some point in the next 3-4 years.  If he were to have a seizure again, we are to make sure his airways are clear, and lay him on his side, and, well, ride it out.  Until a seizure lasts more than 10 minutes in length, or occurs multiple times in a 24-hour time period, they are considered “normal” and not life-threatening.  Which, while great news, isn’t exactly comforting to a parent’s heart.

The good news is that by the time we were discharged at 11 pm that night, Seth was more than back to normal. 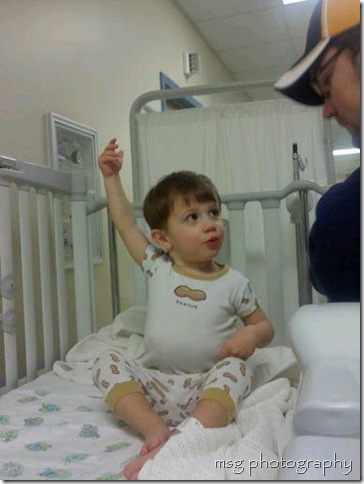 Happy, (almost) healthy, and wound up from the apple juice and attention.  We were gifted with a new car seat from the volunteer staff at Vandy, and a $75 co-pay later, we were on our way home.  As hard as it was to place Seth in bed and walk from his room, both Jim and I needed our rest, desperately.  We prayed safety and slumber over our baby boy, and fell into our own bed.

Bright and early at 5 a.m Monday morning, Seth found us.  He was still feverish, but otherwise, no worse for the wear.  We stripped him down, gave him a sponge bath and some Tylenol, and tucked him into bed with us for another 3 hours of sleep.

Tuesday, the fever broke; and by Wednesday, after a full day of Mother’s Day Out, dinner with the Kings, and AWANA Puggles, he walked in the door at 8:15 p.m. and said to me, “wassup, Mom?  Where’s my peeps?”

I’d say we’re back to normal.

I can't imagine how scary that must have been for you guys. I'm so glad he is ok!

So glad you have a happy ending to this story and that sweet Seth is well...

Wow! So thankful for this happy ending! P.S. you should get the adorable pink/orange bag. :D

I'm so glad to hear that Seth is doing better. I hope that he has no more seizures!

i love happy endings :) and Seth's back-to-normal greeting. glad he is better and hope there are no more seizures for your little boy.

I know what you went through! My firstborn son had his first febrile seizure when he was 2 years4 months old. It was HORRIFIC to witness. He was in my husbands arms and even once the seizure was done he just wasn't "there". The only part that might have been easier for me is that my twin sister and I BOTH had febrile seizures when we were toddlers (I can't imagine my mom going through that double the times), so when Isaac started seizing I knew what it was...but it didn't take away from the fact that it was MY baby. We called 9-1-1 and were wisked away to the hospital (I had a 4 month old at the time!!) Isaac has had 2 other febrile seizures since then, 1 just a month after the first, and the second not until he was almost 4. We too were told just to ride them out...but do to various reasons we ended up calling 9-1-1 the other 2 times as well. They are SCARY and horrible to witness. And there is NOTHING.YOU.CAN.DO. which I think is the worst part. As a mom you want to do something to fix it and you just can't. We became very diligent with treating ANY sign of a fever with tylenol/motrin because we just didn't want to see him go through it again. Thankfully, our daughter hasn't had any and Isaac is almost 6 now and hopefully old enough now that he won't have them again. Will be praying for your little man and for you as I know what the images and memories are like.

Praise God that Seth is back to his adorable little self. I can't imagine the terror a parent feels when they watch their baby go through something like that. Continued prayers!

So glad to read the happy ending, and hope Seth never has to experience a seizure again!