First of all, happy September!  Yea for the turn of the calendar, turn of the seasons, birthdays, pumpkins, sweaters and all that this wonderful month ushers in!

That said...for my birthday, Jim gifted me with a shiny new laptop.  But.  It's a Mac, not a PC, which is great, but....unfamiliar.

And I blog using Windows Live Writer.  Which is, I'm guessing, a bitter enemy of my awesome new Macbook.


So....ye ol' blog is going to be suffering a bit until I can figure out what I'm doing over here in unfamiliar Apple-land.

But, in the meantime, I can leave you with this super cute picture.  This was our first attempt at the photo booth feature.  And so far, it's the only picture I have on this computer, so....it'll have to hold you all over until later! 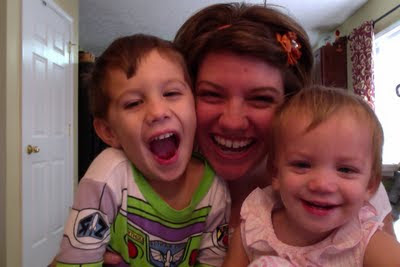 Posted by The Writer Chic at Thursday, September 01, 2011

My hubby is a MAC lover :) I have yet to venture into his side.....it is all so unfamiliar and change is something I can tend to drag my feet in :) He loves his little MacBook though :) Enjoy!!

love the photo! All the computers in this house are MACs except my laptop, which is what I use to blog. It's so different!
:)

I switched to Mac a year ago and I guarantee you won't regret it! You will have it all down in no time!