If I really wanted to do a year-end recap justice, I’d be rambling on from now until the ball drops, so….I’m going to try to follow in my dear Mandie’s footsteps, and just do a photo-a-month summary.  Here’s to my best effort! 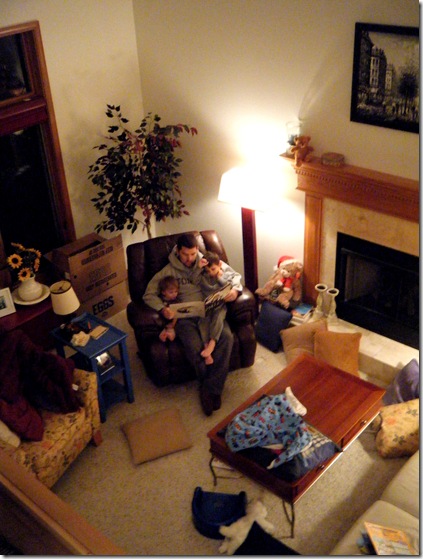 January…. Home again, home again, jiggety jig.  Moving back to Ohio from Tennessee in the middle of winter with two toddlers while 5 months pregnant meant we lived amid half-unpacked boxes for weeks on end, and avoided unpacking with multiple readings of Otis.  Seth started karate, Tiffany surprised us with a whirlwind visit, and we adjusted to life without our White House besties. 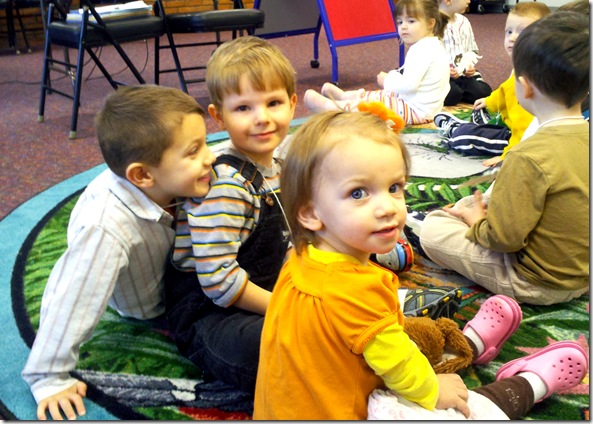 February… Winter in Ohio isn’t super fun.  I’d forgotten.  But we learned our way around our new town, visiting the uptown library for storytime, and practiced the layout of the neighborhood Kroger.  Seth got his first buzzed haircut, thanks to Uncle Josh.  Erin got her long-awaited rainboots.  We spent a lot of time in our jammies, and, to be honest, I spent a lot of time reminding myself that moving “home” was the right thing to do. 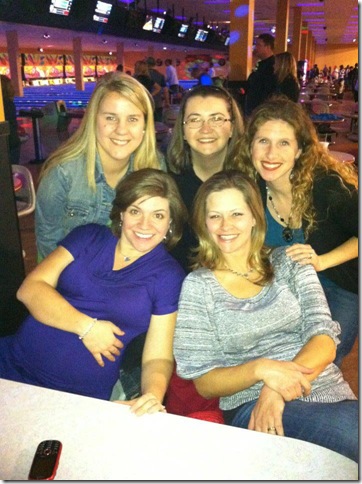 March….  We logged SO MANY MILES in the Flex in March, and it was worth every one.  We started out the month with a visit to Chicago to visit Daina and her boys, and then worked our way further north to spend a few days in the Wisconsin Dells, where we purchased our timeshare property (which we have already enjoyed so much).  After going north, we headed south for a much-needed visit with our WH peeps.  The weather was ideal and we got to see so many of our friends and just enjoy each other’s company again.  I was able to be the one to send Tiffany off on her National Guard adventure while we were there, which, of course, was bittersweet.  We hosted some more Internet-turned-real friends in our home (before they trekked from their North Dakota home to sunny California), and I retook my drivers’ test in order to get my Ohio license back. 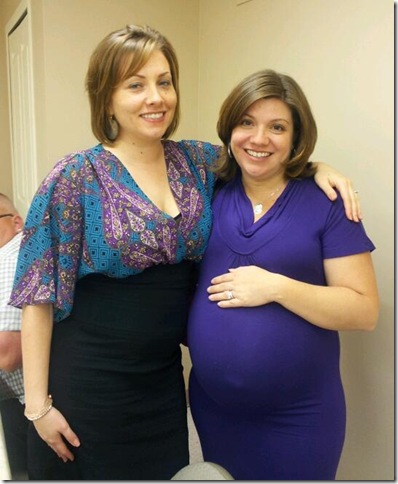 April…  April was emotional.  The month started out with me getting a stomach thing that was ROUGH. Easter was sweet, and we took the time to travel to Bellevue to visit my grandparents (which is always a great time), and I even took the kiddos to the Cleveland zoo to meet up with friends, but the month was overshadowed by the sudden death of my aunt Kim, my dad’s only sister, and the last living member of his immediate family.  While it was wonderful to see so many members of my family (that is my cousin Ali [Kim’s oldest daughter], newly pregnant herself!) at the funeral, traveling back and forth to Cleveland several days in a row resulted in some health issues that led to some blood pressure issues that landed me in the hospital for a few days.  That experience ended up being so much more traumatic than I could have prepared for (I have yet to blog about it), and the month kind of ended on a sour note. 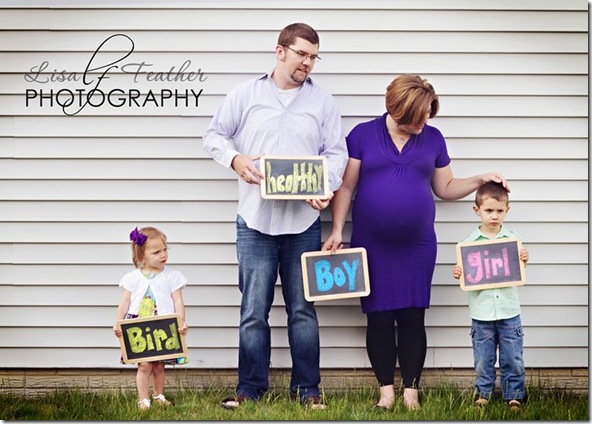 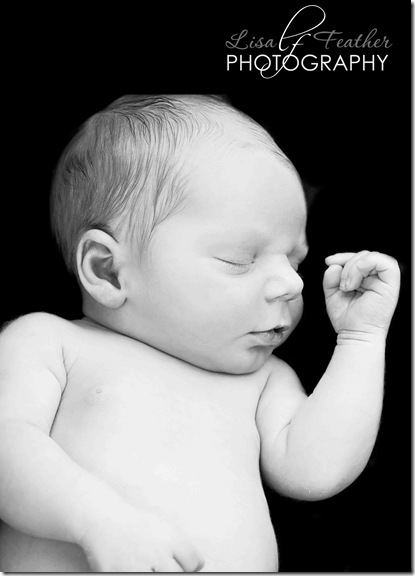 May…  In May, everything changed.  Little Miss became a toddler with turning TWO, we said goodbye to being a family of four, and we welcomed the final, perfect, member of our family with James Ethan’s birth.  Some changing family dynamics stretched my heart, and the outpouring of love from some unexpected sources (also not blogged about or properly thanked – shame on me! Katie, Rachel, Jess…I love you gals!) took my breath away.  Maternity and newborn photo shoots gave us memories to treasure forever, and sweet friends in Tennessee made sure even sweet Duncan had his third birthday commemorated. 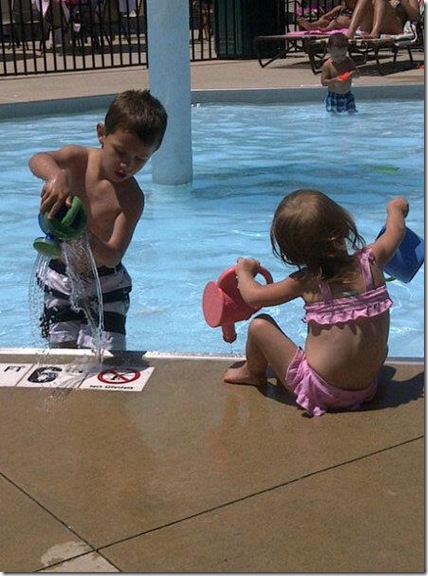 June… June was SO HOT, and found us, newborn and all, at the pool a lot.   Karate in the park, trips to Sonic, backyard pool time at Gramma’s, and lots and lots and lots of snuggling baby James was how we ushered out the first half of the year.  Seth got bunk beds, and we partied hard at cookouts, and it was summer fun at its best. 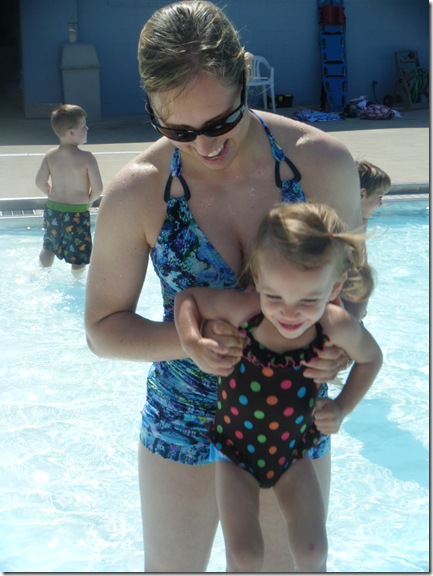 July…  Erin moved into her big girl bed, our master bedroom got painted, and we celebrated Independence Day with a cookout at Auntie Heidi’s and then fireworks in Gramp-e’s backyard.  We had breakfast at the zoo, and Seth made his first solo trip to Tennessee to visit Gage, but most importantly, our wonderful Miss Tiffany came home from Army training and spent a week of vacation with us, and it was WONDERFUL. 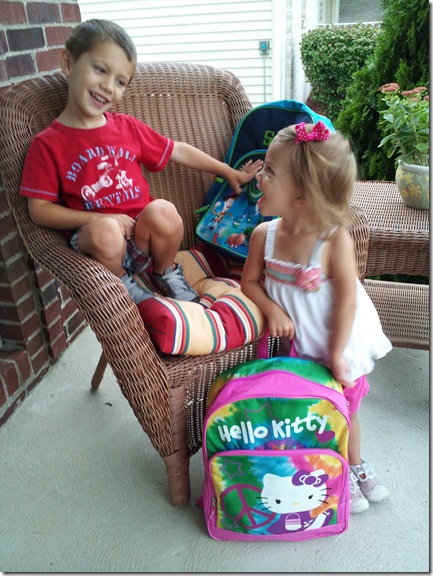 August…  August was good to us.  Visits to Bellevue to see the great grandparents were sweet (and Erin got asked to be a flower girl in Amy and Ben’s wedding next fall!); a trip to Tennessee early in the month was awesome (and not just because AP finally got to meet James!); we spent lots of time at the park; Erin’s hair grew a million inches; the upstairs bedrooms got painted; Daddy got a great deal on a bike trailer; and the big littles started preschool for the year.  While we did say goodbye to Jim’s grandfather, and though I did battle the worst case of thrush EVER KNOWN TO MAN, I’d have to say August was probably my favorite month of 2012. 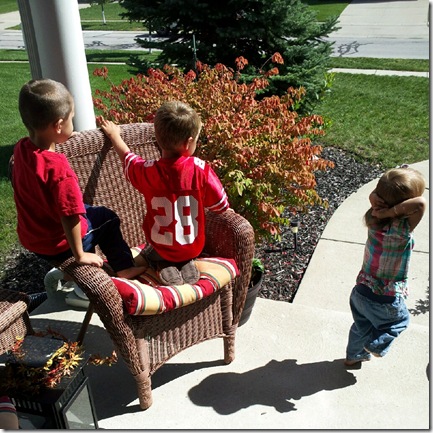 September… September was also none-too-shabby.  (I mean, c’mon, they made fudge covered coconut creme Oreos!)  But the leaves turned, the temps fell, and I got an awesome new knife for my 32nd birthday.  Nonna and Grandma came to visit Over the Rainbow for grandparents’ day, and my sweet friend “kekis” welcomed her so-long-awaited daughter Kate. We geared up for the new Mom Journey at church, and I finally started to really feather my nest with the arrival of my most favorite season. 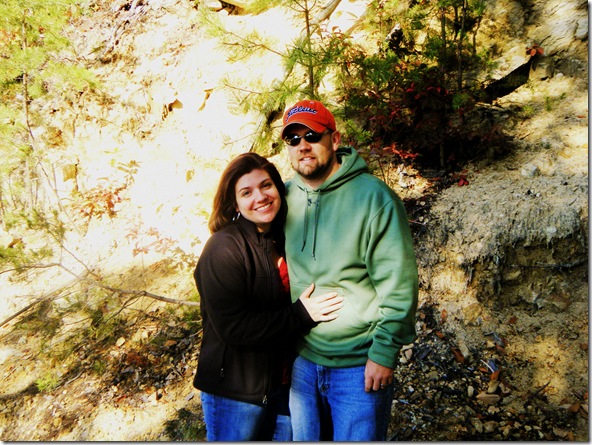 October… Full of more stuff I have yet to blog about.  Doh!  A WONDEFUL 7th anniversary trip to Gatlinburg, complete with four-wheeling and wonderful meals and moonshine from Ron and Brenda, bookended with the Steelers vs. Titans game with the Hatches and buying Jim’s new work car, was a fabulous way to start the month.  Wonderful fall festivities like pumpkin picking with friends and, of course, trick or treating (even in sleet) rounded out the month. 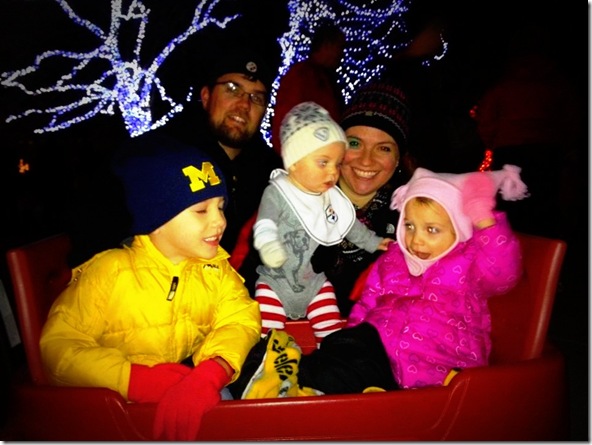 November…. The month of Thankswinning and the return of our Miss Tiffany for 10 whole days!  I mean, yes, I had hernia surgery and the boys got ear infections and James cut his first tooth, but really, it was all about the fun we had and how complete our family felt when Tiff was here with us.  We decked our halls and made a killer Thanksgiving dinner and saw Lincoln and  shopped and ate and ate and ate and it even snowed and we went to the Lights Before Christmas at the zoo and took our Christmas card photo and celebrated Seth’s 5th birthday (early) and took the kids Christmas shopping and made popcorn balls and mourned the death of Hostess with Tiff’s first fruit pie…. it was, simply, the best week-plus, like, ever. 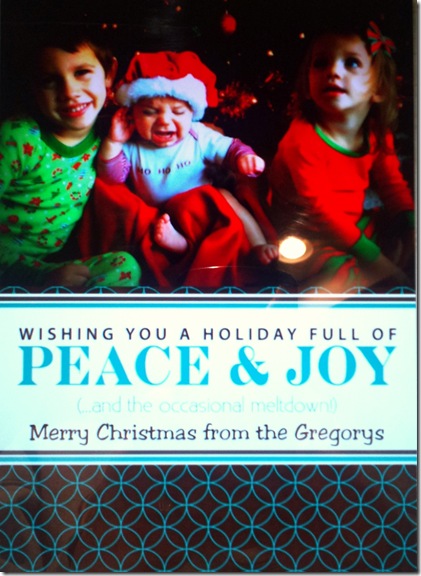 and December… And the year o’ transition went out with a bang.  Seth returned to Tennessee with Tiffany after Thanksgiving, so we trekked down there to pick him up the first weekend of the month.  We were able to go out to dinner with our (old? former?) small group-slash-best friends at the Cheesecake Factory and I have not laughed that hard in a sweet forever (even if Andy has forever ruined the song Sleigh Ride for me).  We ventured to Opry Mills and the Gaylord to see the lights and “That Elusive Tree” and I was also able to attend the baby shower for our former pastor’s wife (which was SO special, as they have waited a sweet forever for this precious gift!).  The rest of the month was mostly a blur due to Erin’s surgery to remove her tonsils and adenoids, and what was supposed to be routine turned into 8 days in the hospital.  Thankfully we were home in time for Christmas – which was also so special, since it is our first Christmas at home since 2007 (which was sort of a no brainer that year, since Seth was just days old!).  Speaking of, Big Mister turned 5, was a rockstar at his school program, and enjoyed Christmas like never before!  James’ first Christmas, Erin’s PINK!!! BIKE!!!, the girl-less photo with Santa… It was a month of wonderful memory making…

And even as I sit here drafting this post, interrupted numerous times, because my big little is puking his guts out, I have to say, 2012 was nothing like I thought it would be.  But what ever is?  So…..bring it on, 2013.  I don’t know what you’ll have in store for me and those I love most, but…..I’m ready.

So fun to read! Love it. The picture of you and Jim is great!

2012 was a busy year of ups and downs, wasn't it? Thankful for our friendship through it all & we ended it on the upside. Your celebration of our baby Kate brought tears to my eyes - as usual! (You'd think I was pregnant Erin or something!) Love you and looking forward to what 2013 will bring for all of us!

Bring it on indeed!
I enjoyed reading your year re-cap. There were lots of sentences that made me smile. :)

Fabulous recap. Love all the pics and memories. Let's do this 2013!!