With heavy steps, and a heavier heart, I followed the paramedics into the house.

If you are a parent, you’ll understand that my first instinct was to go straight to Seth’s side.  However, common sense told me that I’d only be in the way.  Jim was there, and in that moment, I knew that my baby girl needed me more than my baby boy.

I knelt next to the coffee table and prayed the anguished prayer of a helpless mother.  The one where all the emotions of the world are encompassed in one word: please.

I’m not sure how many moments passed; not many, I’m sure, though of course, it felt like an eternity.  More rescue personnel had rushed into the house; I’d lost track of many people were crowding into my family room.  It was, obviously, too many, though, because almost immediately, a number of paramedics came back downstairs.

In the moment that my eyes met those of the first EMT down the staircase, my heart broke.  It was as if everything went into slow motion.  He seemed to be moving too slowly to indicate what I felt would be the appropriate level of urgent activity, given the situation.  His expression was one of sadness and pity.  And for a split second, my heart told me that something terrible and tragic had happened in the few moments I’d been separated from my boys.

The moment passed, time returned to its normal cadence, and I saw the next paramedic clear the landing, with my darling, brown-eyed toddler cradled in his arms.  In his arms, and alert.  Alert, aware, and beautifully shaking as the cold January air hit his bare legs.

“Alright, mom, let’s go for a ride,” someone said to me, and Jim nodded his consent even as he ushered me out the door.

Webster defines surreal as “marked by the intense irrational reality of a dream.”  That’s precisely what we were living.  Walking down our driveway, the concerned faces of our friends and neighbors awash in the red glow of the ambulance lights.  Several stepped forward and offered to keep Seth for us; how strange it felt to have to explain that it wasn’t my pregnancy that was the concern, but Seth himself.  Watching their faces fall at this news only heightened the pain we were already feeling.

I climbed into the back of the ambulance, crowded with four rescue workers.  I felt so out of place.  I couldn’t see Seth, and he wasn’t making any noises; all I could do was try to stay out of their way.  I curled up on the bench seat, Seth’s Curious George doll clutched against my chest.

An audience had gathered around the back entrance of the ambulance, so one of the EMTs gently shut the doors.  I immediately began to feel claustrophobic and nauseated.  I tried to calm my breathing and slow my rapid heartbeat, but then Seth began to scream in pain and fright, and I came to my feet, and none-too-sweetly demanded that someone tell me something.

One of the paramedics turned me away from Seth, and explained that they were trying to get him restrained in the makeshift car seat, rather than the stretcher, to keep him upright on our 40-minute drive to Vanderbilt Children’s Hospital.  While this did little to comfort me, I felt marginally better to know that things weren’t so urgent in nature that we’d needed to go flying out of the subdivision at breakneck speeds before we were all properly secured in the rescue squad.

I asked the paramedic if we still had a few moments – if I had time to go back inside and gather some things.  Not knowing how long we would be at the hospital, I had the foresight to pack my medications, a change of clothes for both Seth and me, and his worn and loved Softie blanket.  (Granted, we didn’t think to pack diapers, or place his car seat in the neighbor’s car….but next time, we’ll know.)

Our neighbor Stephen offered to drive Jim to Vanderbilt, and, unbeknownst to me, they left even before we pulled away in the ambulance.  (I’m actually glad I didn’t realize it; I kept telling Seth, “Daddy is right behind us” the whole way down I-65.  I don’t know if it made any difference to him, but it made me feel better.)

FINALLY, we pulled away from the curb.  Since it was only me, Seth, and one technician named Beau in the back of the ambulance, I was able to sit and really study Seth for the first time since walking into this hellish reality. 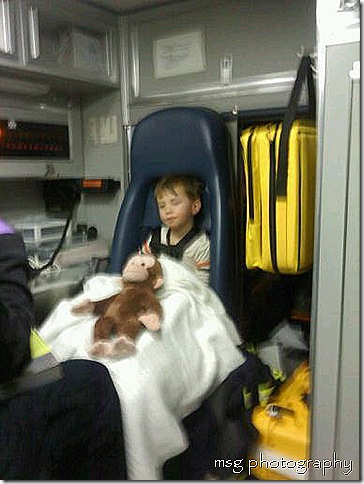 My sweet boy, but not.

He still hadn’t responded to anything other than the EMT’s (failed) attempt to get an IV started.  He just rested there, unseeing.  And despite the reassurances that I kept forcing from my mouth, and the constant stream of questions I kept asking him – “Seth, we’re in an ambulance, buddy.  What sound does an ambulance make?  Wee-ooh, wee-ooh, wee-ooh?  Right?” – I couldn’t help but think: is he in there?

Is there brain damage?  Will he recover?  Will I ever hear his sweet voice again?  What was the last thing I heard him say?  Will he ever again reach for my hair, drawing it to his nose, to say, “smell?  mmmm…..good!”  Will he walk?  Will he smile?  These questions and more tormented me, no answer in sight.

***I’m not trying to drag this out, I promise.  It’s just hard to relive it, and to get it all down on paper.  Not to mention that I doubt you want to read novel-length posts.  I should be able to wrap up the story in one more post.  Bear with me.

Oh, Monica. OMG. OMG. I had no idea this was going on. My heart is in pieces for poor baby Seth .... please let us know that he's okay now?? xoxo

I can feel your pain and heartache through your words. How frightening.

Just wanted to let you know I checked in to read Part II. [[[[hugs]]]] Hope you are all doing well today!!