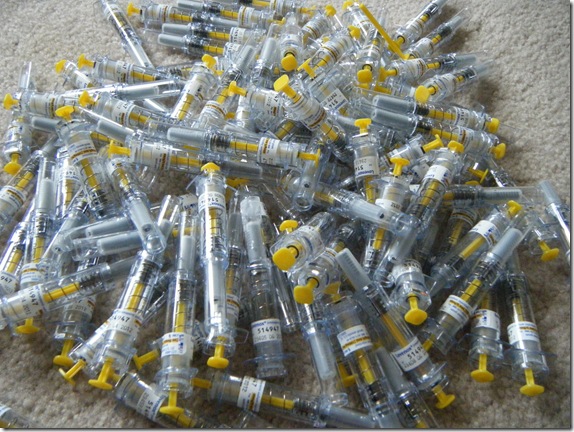 14 weeks of daily Lovenox injections at approximately $32 a pop.

I’m a little over halfway through my doses.  If we deliver Baby Girl at 36w, I’ll probably stop the Lovenox at about 34w, and switch to a less volatile blood thinner.  So, I’m 21w today; that’s 13 more weeks of shots.  Whoo-hoo!  That’s less than 100 needles!

Up until now, because our 2009 deductible was met around the time of Duncan’s birth, all the medications I’ve been on have been 100% covered.

Welcome, 2010, and a fresh new yearly deductible of, well, let’s just say, A LOT, and we pay 100% of all expenses up until that deductible is met.  Which means, for a while, we’ll be dropping about $445 every other Monday, for the shots alone.

I’m not telling you all this to make you feel bad for our financial “plight.”  We’ve had ample time to build up our HSA, and don’t have to scramble too, too much to appease Walgreens.  I point all this out just to commemorate the sacrifices we are already making for this daughter of ours.

It is so worth it.

PS – 21w update will post tomorrow after our appt. and ultrasound with the MFM office.

Ouchies! (your Walgreens employee friends thank you.) ;) Can't wait to hear how the appt. goes! *hugs*

The title says it all.

BG is so blessed to have such a loving and selfless mommy! I can't believe you are 21 weeks! YAY!!!!

I used to look at needles as something scary...now I just think of "hope". I pray that one day this will help me to have another healthy baby in my arms.

Owweee!!! You're such a great Mom! There's a reason men don't have babies right? LOL

I have a pile very similar to that! I chose to take the Heparin instead because it was cheaper...even though it's a pain to give myself 2 shots a day!

I remember having to do injections of BT's after I had surgery -ohhh they were awful.

What mommas will do for their babies. BG is a very lucky little girl!