I didn't know it would be the last time

We did it on a whim, really. I mean, we had talked about it. We knew it was coming sooner than later -- definitely in the next month or two. We knew Seth was showing definite signs of being ready.

But I didn't know that when we put Seth to bed on Saturday night, it would be the last time we lifted him over the railings of his crib.

Sunday afternoon, the front of the crib came off, a low railing went on, a baby laid down on the mattress for his nap, and two hours later, a little independent boy got up. 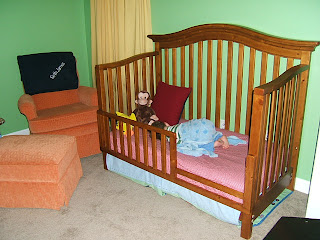 It was a ridiculously smooth transition. Ridiculous. He plays on his bed when he's awake -- jumping, running from end to end -- but will stay put on his belly, little butt up in the air, when it's time to sleep. He didn't budge during his nap, but I had my concerns about making it through a twelve-hour night.

We placed a baby gate in front of his open door when we went to bed in hopes that we'd hear him if he woke up in the middle of the night and started wandering around his room. Even though I barely slept, keeping one ear tuned for sounds of Seth.....nothing.

Well, until Jim's alarm went off at 5:15. I got up to shut Seth's door so that Jim wouldn't wake him, and he was still sound asleep, blanket all tangled in his legs.....in the middle of the floor.

He must have rolled out of bed at some point in the night, but apparently, he never woke, and slept soundly until his usual 8 a.m.

We will be getting a new toddler bed for Seth, so the front will go back on the crib in plenty of time for the new baby. So it's not like the crib will be out of sight for long. But still.

I didn't know it would be the last time.

We didn't move Andrew out until about two weeks before his birthday. His THIRD birthday. LOL

We had originally planned to move him before Benjamin was born, but he showed NO signs of readiness, and he never ever crawled out. So we bought a crib CHEAP from a friend and moved him into that when B was born.

Neither of our cribs converts, so we had to leave him in there until he was ready for a double bed. So a couple of months ago, right before he turned three, we took apart the crib and put the box springs and mattress in the corner of his room where his crib was.

Because we waited so long, it was a *seamless* transition. He's never gotten up without permission. I remember at Andrew's 15-month well visit, his pediatrician asked if he'd tried to get out of his crib yet. I said no, and she said, "Good! Keep him in it until he's three if he'll let you." I remember thinking she was crazy. Little did I know it was great advice!

I know Seth will do great! It seems he has already. *sniff*

How sweet! How adorable that he ended up on the floor. :)

Write or call soon when you get a chance!
Daina

He's so good! My David (2) wanders around the room, playing every night until he's ready to sleep. Half the time he ends up falling asleep on the floor! We have those door knob covers on the kiddies' bedroom door so that they can't get out and get into anything dangerous.
It might be that I had to move both Gabi and David to "big kid" beds when they were about 11 or twelve months old. Both of them repeatedly had tried climbing out of the crib, so I moved them before they hurt themselves.
Michael can stay in his crib forever...