I was actually given my Mother's Day gift early this year, and I feel really badly that I've had it for almost six weeks, and haven't even used it yet. 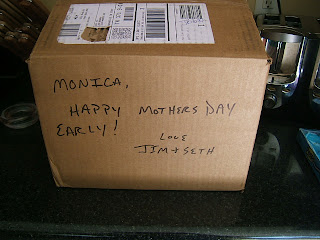 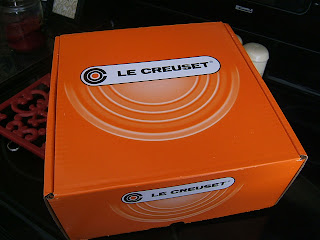 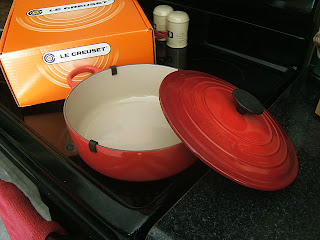 Granted, April was an insane month for us, and my culinary skills were some of the first things to suffer. I can't tell you the number of nights we had pizza, cereal, noodles, or bagels for dinner. It was basically a "whatever is handy and a carbohydrate" practice.
May isn't looking much more promising, just due to our schedules, but I will eventually get around to using my new dutch oven. I love it -- almost as much as I love my three boys who gifted me with it.
Happy Mother's Day!
Posted by The Writer Chic at Sunday, May 10, 2009

I am SO jealous!! And also on a forced-for-lack-of-time high carb diet. I hear they're all the rage in the pre-school set!

I have no idea what my "boys" have gotten me for Mother's Day...they're all out shopping right now.

We have 2 - stock pot and dutch oven. We LOVE them Everything cooks easily and seems to cook faster. Enjoy!

That was Jenny, not sure why it posted annonymus

Oh, I have one of those and I LOVE it! You can do so many things with it. I love that it can go from the stove to the oven!

I love it! I want it!! Those are the best dutch ovens ever! Let me know if you want a really good short ribs recipe. That's my favorite thing to cook in my non-Le Crueset, but really cute purple one. (kelly&marty)