Will she be a mini-me?

I finally have in my possession one of my all-time favorite pictures: 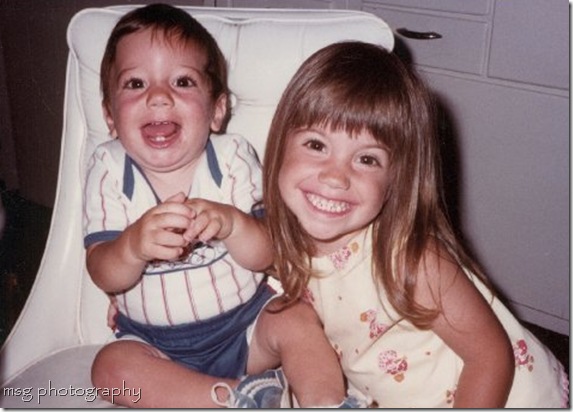 Seth looked more like my side of the family when he was teeny-tiny, but as he’s grown into his looks, I see more and more of his daddy’s genes popping through.  It’s hard to imagine that Duncan would have looked different than Seth; I mean, I know he would have looked uniquely like Duncan, but I can’t help but think he would have shared traits with Seth that would leave little doubt as to their brotherhood.

But I’ve started to wonder who Baby Girl will take after; if she will be the child that gets Jim’s towhead curls and blue eyes, or if she, too, like her brothers, will have my darker coloring and stick-straight hair?

I guess only time will tell.  For now, it’s enough to dream.

I love this picture of you! It makes me smile! You are just so adorable and look like you could just burst with excitement! I know one thing, no matter who Baby Girl looks like, she will be ADORABLE!!!!

Look how cute you are!!!

What a great picture- hope baby girl gets your smile!

ADORABLE!! I think Seth looks A LOT like your brother from that picture. So cute! And you with your big ole smile! How can anyone not love you? :-)
Baby Girl will be BEAUTIFUL and PRECIOUS no matter who she looks like! I can't wait!

No doubt that's you! Seth does look like your brother in that picture. :) So cute!