Make new friends and keep the old; one is silver, the other is ....

We did a lot of this this past weekend: 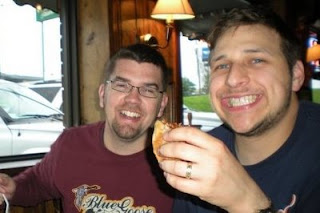 Laughing, eating, just hanging out with the people we love most -- the ones who know everything about you and love you anyway, the ones who you share the best stories with, the ones who've been there through it all.

Jim had to go out of town at the last minute on business, so Doug and Sara actually drove to Nashville sooner than Jim could fly home. Which ended up being a great thing, because Doug was able to clean and prep the grill to his satisfaction on Friday night. It was done in an attempt to get it ready for Jim the minute he pulled in the driveway, but Jim's flight ended up being so late that Doug did the majority of the cooking, too. We had bourbon peppercorn chicken, lemon garlic chicken, steak fillets, garlic cheddar mashed potatoes, grilled asparagus, and honey-glazed carrots. Oh, so yummy, and the perfect way to kick start our weekend.

Saturday, we ditched the original plan of visited the famed Pancake Pantry in hopes of sleeping in. No such luck on the sleeping in, but we still enjoyed a lazy morning. With dreams of the incomparable Jack's barbecue dancing in our heads, we headed off to Opry Mills for a little quality time at Bass Pro....wait. That was just Doug's fantasy.

We did head to Opry Mills, but some quick thinking on my part and some eyelash-batting from both Sara and I resulted in some ALONE girl time to shop (score, Old Navy tanks for $2!!!) and a relaxing lunch at Chili's, while the boys plus Seth went to Bass Pro, and then to lunch. As we parted ways in the parking lot, Sara instructed, "Now don't you two old married men with the baby stroller be getting yourselves hit on by any hot chics!" (We laughed, but the joke ended up being on us girls.)

Tragically, Jack's was too crowded, so the boys ended up at Hooters. Yep, that Hooters, with the orange shorts and white tanks.... Anyway, apparently, our hubbys are uber-charming, and with the added bonus of Seth...let's just say, when we got home later that afternoon, we found a treat hidden away in Seth's diaper bag: pecan pie! Who knew we both got such irresistible guys?

We parted ways again while the boys headed to Best Buy to haggle with the world's worst manager (hats off to you, Darius. Now you're stuck with the dented fridge), and Sara and I headed to Target to camera shop.

(sidebar: our camera bit the dust for good on Thursday, so photos will be on hiatus until it is replaced. I did find one at Target I liked, but they are out of stock, so, on to looking for it elsewhere.)

Now, for the best part of the weekend! DATE NIGHT.

Jim and I arranged for our first babysitter since we've been in Tennessee, and who knows when the last time Doug and Sara got to enjoy a night on the town. So we (females) got all dolled up -- Doug, you too, I guess. You looked quite fetching in your Tigers ball cap -- and headed into downtown Music City, USA.

After strolling down Second Avenue (and by stroll, I of course mean stepping in horse poop - see evidence below), we decided on dinner at Big River Grille and Brewery. I was the only one who didn't opt for a pizza, and paid for it. My dinner was less than marginal, but the pizza's got a thumbs up. Dine at your own risk, I guess, and avoid the smoked chicken enchiladas. 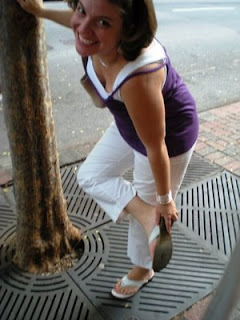 After dinner, we headed to The Big Bang.

I don't care who you are, what your taste in music is, or whether you drink (alcohol) or not. If you are ever in Nashville (or anywhere with a Big Bang, I'd venture to guess), you HAVE to check out this dueling piano bar. It was phenomenal.

We got there early enough (about 8:30?) that we didn't have to pay the cover charge and that we got great seats. We stayed for almost two hours, and were thoroughly entertained, by not only the uber-talented musicians, but by the horribly intoxicated coeds who were trying oh-so-hard to look cool and pick up any and every bachelorette-party attendee in the house. Again, evidence -- the parade of prepsters: 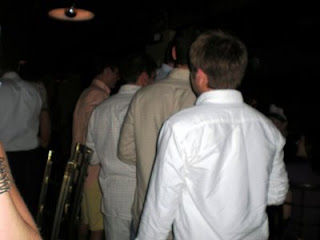 After a great (?) breakfast at our traditional Cracker Barrel (holla, Uncle Herschel!!!), we packed up Doug and Sara with a cooler of salmon and Jack's bbq pork, and sent them on their way back to the great state of Ohio and their three little ones.

Doug, Sara -- we already miss you! And don't forget -- this trip is now an annual event!

(holy junk, I still have the internet! YAY! anyways...) That post had me giggling the entire time! I'm such a girl! LOL I'm so glad you had as much fun as I did! It was a blast & I'm looking forward to next year already!

Glad to hear the four of you had fun...sounds like a wonderful time.

In regards to the camera...not sure what you are looking for; however, I know of two reliable online sites that sell cameras/equipment. Typically, their prices seem better than a "brick and mortar" store.

Yay!! I am so glad you guys had a good weekend.

I'm glad you guys had such a good time!!

What a wonderful weekend! I love friends like that. Awesome. We have some that live in TX and we don't get to see them NEARLY enough.
And thanks for the piano bar tip! We're quasi- close by, you know! We should come visit and people watch at the piano bar {sans poop, please!}

Oh Monica how fun!!! That looks like you guys had a BLAST and I am soooo happy to see it =)