I’ve not had a chance to update all you interpeeps on our poop potty-training progress, and boy, we have made some!

In the last three weeks, we have only had TWO accidents.  One on vacation, and one the week we came home.  After that…..not a single accident.  He is going into the bathroom, on his own, without prompting, to do his #2 business.  Yipee! He even went on his own for his teachers at his new school, which I was totally not expecting!

And beyond that, he hit a major milestone this past week that,  yes, forgive me someday-grown-up-Seth, I’m going to document.  (Seriously, I thought PTing was gonna kill me, so I’m claiming these victories big time!)

Yes, my child needs a certain environment prepared at times to get his business done…

Yes, it includes a pillow.  On the potty. 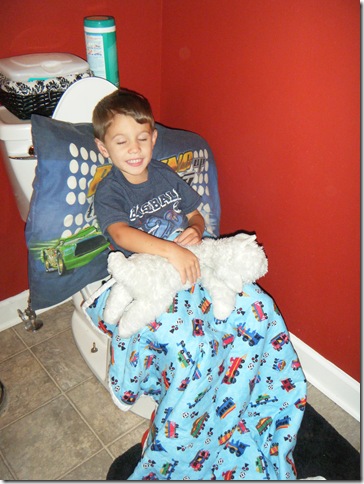 But, hey. I aim to please.  A happy boy (who is comfortable enough to poop in the toilet, instead of on my floor) makes a happy mommy. 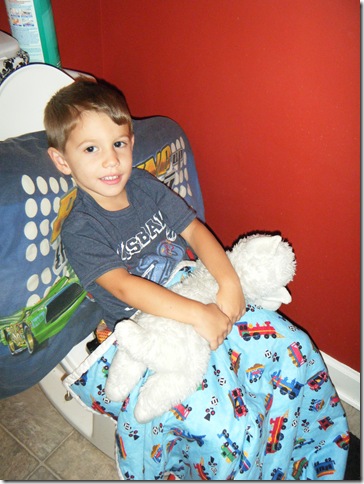 The smile eventually faded, though, when he realize that something was “off” today.  After about 20 minutes of no action, he looked at me, pleading in his eyes, and said, “Mommy, it just won’t come out.  Will you get it?”

It hurt me to tell him that I couldn’t make it come out any faster, and that he just needed to relax and be patient.  (Seriously, telling that to a three-year-old?  Shoot me now!)

But he listened, and a couple minutes later I peeked in to see this: 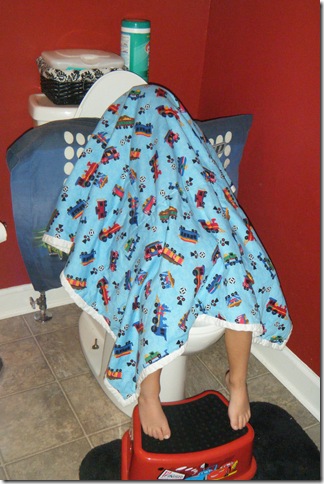 And a few minutes later…..the deed was done!

I am SO proud of him, and how far he has come in the last few weeks.  Granted, this process has taken longer than I wanted, and he is a little older than I expected, but…he’s just about got it.  He has 10 more stickers to earn to get his long-awaited Daisy train (who hasn’t been sure she wanted to live here, what with all the poop flying around), and then…I’m gonna consider this little guy officially day-time potty-trained.

And look at that……  I survived.  Who would’ve thought?

Way to go Seth. I knew you could do it, but it just had to be at your time.

Mommy, you did a great job. We will have to do something special when you get here this week-end.

Awesome job Seth and Mommy! These photos are too cute:)

woohoo! I swear it's the greatest accomplishment of a momma's life. :)

Hooray for Seth and Mommy!!! I knew you could do it!

I love love love this series of photos. I think you should frame them and hang them in a row in your bathroom. And never take them down. Not even when he's in high school! :-D