30DBC24: My favorite movie and what it’s about

Hmmm.  There are a dozen movies that, no matter what, if it comes on, I’m watching. 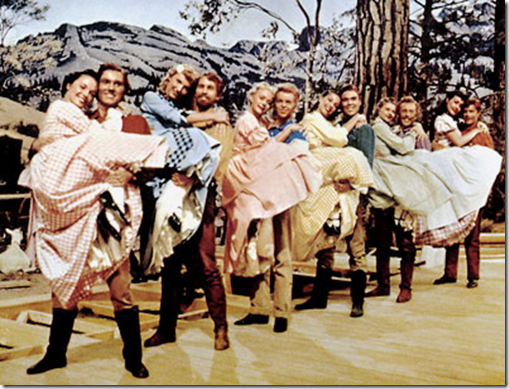 It’s 102 minutes of pure fun, and if you’ve never seen it, here is a synopsis:

A backwoodsman named Adam Pontipee and his new bride Milly agreed to marry despite only knowing each other for only a few hours. On returning to his cabin, Milly is surprised to learn that Adam is one of seven brothers living under the same roof.

Milly teaches Adam's rowdy, ill-behaved younger brothers manners and social mores, and shows them how to dance. At first, the brothers have a hard time changing from their "mountain man" ways, but eventually each comes to see that the only way he will get a girl of his own is to do things Milly's way, which they test at a barn –raising (my favorite scene!), where they meet six girls.  However, the girls already have suitors from town, who jealously taunt the brothers into fighting during the barn-raising.  Although the brothers do not start the fight, they are banished from the town after destroying the barn in the process.

Winter arrives, with the six younger brothers pining for their girls. Adam tells them that they should stop moping around and take whatever action is necessary to get their women back, so the brothers kidnap the girls, then cause an avalanche so that they cannot be followed by the townspeople. They have, however, forgotten to kidnap a preacher. Milly is furious at Adam, as are the girls at having been kidnapped. Adam, surprised and offended by Milly's reaction, leaves for the trapping cabin further up the mountain to live out the winter by himself.

Months pass, and eventually it is spring. The girls have now fallen in love with the brothers, and Milly gives birth to a daughter. Adam returns home in the spring just as the pass is opening. As a newly responsible father, he has become aware of how worried the townspeople would be about what has happened to the girls. Adam tells his brothers that they need to take the girls back to their homes in the town, but his brothers do not want to do so, and the girls do not want to return home, either.

The townspeople arrive, with the intention of taking vengeance against the brothers for the kidnappings and charge to their rescue. The preacher, hears Mlly’s baby cry in the distance, and worries that the baby might belong to one of the girls, who decide, simultaneously, to claim the baby as their own. This misinformation gives the girls and the brothers their fondest wish -- the townspeople insist that all six couples marry immediately in a shotgun wedding.

I love the story of Adam and Milly and the whole Pontipee clan; I love the costumes, the choreography, and the music.  But mostly, I just love that it makes me feel good – always, no matter what my mood, if I can turn this movie on….I don’t know.  It’s just my go-to comfort film.

I have never heard of that movie...sounds entertaining!!!

Monica,
You totally need to go on YouTube and see the remakes of sobbing women and lonesome polecat that my husband and his brothers did. They grew up loving that movie (as did i.

I am so not laughing about The Little Mermaid! I loved that movie...obsessively loved it and did my best to sing just like Ariel. She so got me! I felt like it was my story...in the midst of my teenage angst in love with a boy that my parents wouldn't let me see (for my own good, of course). Ariel's predicament was my own story of forbidden love...sigh. =)

Can I just add that it is amazing to me that I ever had the energy to expound on such teenage angst? Still it was a great movie...beautiful soundtrack!