I can hardly believe that four months have passed since I last held my darling Duncan.  I thought the three-month mark would kill me, yet here I am, staring down four.  And you know what?  It’s not as bad.

Maybe because his due date has come and gone.  Maybe it’s because I can look out almost any window at church and see the leaves of his tree changing in the autumn sun.  Maybe because God’s peace, and time, does indeed let things begin to miraculously heal. 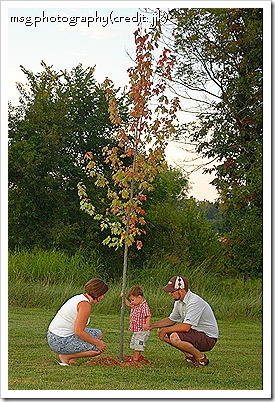 So this month, I offer a simple “Hello, baby.  I miss you,” to my Duncan, and instead, share something that has been on my heart for a while.  I pray this will bring understanding and clarity to some, while being a tribute to Duncan on his four-month birthday.

Even though we have traveled back and forth between Ohio and Tennessee numerous times since Duncan’s death, it seems each trip home places us in the company of someone we haven’t seen since our loss.  Often, after the requisite small talk, one will ask, “So, how do you like living in the south?”

My standard answer has been, and probably will be for a while, “Nashville is great.  It was the right move for us, even though the year of transition has been harder than we ever imagined.”

To which I get a variation of, “Oh, yes, about that…I’ve been so sorry for you.”

Well, in case you are wondering, there is definitely a surefire way to get my blood boiling, and that is to refer to the birth and death of my son as “that,”  as if it were a mere inconvenience, like a leaky faucet or a fender bender.  Am I still sensitive to all things Duncan-related?  Yes.  Am I overly sensitive?  Maybe.

But when the “that” statement is followed up with the dismissive, “Well, you know, my daughter/coworker/neighbor’s dog-walker/manicurist’s sister-in-law’s babysitter had a miscarriage with her first pregnancy…,” I feel like I’m a little justified in my sensitivity.

I repeat these “condolences” to Jim, and while he shares my distaste, he never seems surprised.  “Honey,” he says, “people don’t want to think of this as the birth of a baby, they want to treat it like a miscarriage.”

Forgive me my momentary rant, but maybe it is time to clear something up.

Twice, I have had a miscarriage: February 25, 2007, with my first pregnancy, and on October 19, 2008, with my twins.  What I am going to say in no way lessens the heartache and lost joy when a woman miscarries; but as any woman who has experienced both a miscarriage and a birth, whether still or live, will tell you, the two events are profoundly different.

Twice, I have smiled up at my father, holding his grandson, and announced the baby’s name: Seth James and Duncan Thomas.

Twice, I have been wheeled out of the Toledo Hospital, my abdomen drastically smaller than when I’d entered: December 19, 2007 and May 20, 2009.

Twice, I have seen an announcement in our church bulletin heralding the growth of our family: “Jim and Monica ____ proudly announce the birth of their son Seth James, December 14, 2007” and “Former members Monica and Jim _____ sadly announce the birth and homegoing of  their second son Duncan Thomas, May 19, 2009.

Do I need to keep going?

Just as I did not miscarry Seth, I neither miscarried Duncan; I delivered them both.

The only difference was that we got to bring Seth home, and with Duncan, we said goodbye much too soon.

Posted by The Writer Chic at Saturday, September 19, 2009

Thinking of & praying for you today (as always). Love you, Mon!

Well said, dear sister...well said. Although, I'm sorry it needed to be said at all...you said it perfectly. Continuing in prayer for you and your beautiful family...

I think, most times, people just don't get it unless they've walked the same or similar paths. They don't realize that their ignorance causes such pain. I'm so sorry.

Many prayers to you.

I cannot believe it's been four months already. I still think of little Duncan often and look at the precious pictures. I cannot fathom going through what you have had to go through. :(I am sorry for insensitive people.

I am glad you are finding healing at Duncan's four month birthday. Jenna's four month birthday was yesterday. It was really hard for me, but it is encouraging to read about your experience. I totally understand you saying "twice" about all those things. It is hard when people brush off our babies and their lives. Thank you for sharing this today.

Ugh, I'm sorry those things are said to you. Duncan was certainly not a miscarriage. You were able to say hello and goodbye and hold him in your arms. It would irk me to for my baby to be referred to as 'that'.

Sam, you amaze me! Love you

This was such a great post, Mon. And you are right... it does get your blood boiling when someone likens the birth and death of your son to a miscarriage. While births and miscarriage have come in sets of two for you, I've had one of each; and as you said, they are NOT the same. Not even remotely close.

The only thing I can think of when people make the comparison is that they truly just really don't know. Losing a baby is such a painful and horrific thing, and it's almost as if those that make the comparison can't allow themselves to full entertain the thought of whit giving birth to and losing a child is really like. And so perhaps it's easier... or somehow safer... to liken it to a miscarriage.

I am so sorry. Your sweet Duncan is not a THAT. I am so sorry for the insensitivity you have been shown. While I know it will start to catch you off guard less often, it certainly doesn't hurt any less.

Praying for you dear friend...

i lost my son at 18 weeks. i don't know how to feel about the term "miscarriage" (by technical definition, i was 2 weeks away from having a "stillbirth"). but I was admitted into the hospital and induced after learning my son's heart had stopped beating. i delivered him, held him in my arms, watched my husband rock him, witnessed a priest baptize and bless him. and that is not what i think of when i think of the term "miscarriage."i the most sock-me-in-the-face term that was applied to my loss, however, was "abortion." which is what insurance claims read.

i do feel the same way about people telling me so-and-so had a miscarriage, so-and-so had 4 miscarriages, so-and-so had to have a d&c, when they say in way that is dismissive and trivializes the greatness of this loss i feel. i think it's it said with some sensitivity (e.g., adding "it changed her" or "she still cries for the baby"), it's easier to handle, because it comes from a place that respects the profound impact of losing a child.

i find it horrifying that people refer to the birth and loss of Duncan as "that," and I'm so sorry that you have to deal with people's lack of respect and severely insensitive approach. I pray that those who need it most will find their way to this post and be blessed with more understanding.

Monica and Jim , i realize what you are going thru,as our grandson Kirk Allen past shortly after birth.(he was full term)We got to hear his cry and see his little arms and legs kick, then in less then hour he was gone, he went to the father in heaven.It never gets any easier losing him other then We know God took him home and saved him from much pain and suffering.people try hard to understand , but even if you have been thru such a loss, there are no words to express how they really feel. We have to trust in God and his judgement. Love ya all Aunt Cathi

I completely relate. The loss of a baby is horrible at any time, but delivery brings it to a whole other level. Each month will bring more healing through the Lord's sufficient grace.

Oh Mon. I know that you are still hurting. And I love you. And I pray I say the right things. Not only to you, but to others who have gone through any kind of loss. You are speaking for so many. Hugs!

Well said. I know exactly how you feel.

This is such a good post...it made me tear up; I wanted to comment sooner but wasn't sure what to say to make you feel better. I still don't, but wanted you to know I understand and agree!
It does make me feel guilty for calling my loss a miscarriage, but I never did give birth to a breathing or not-breathing baby. Anyhow, you really have a way with words.

I agree with you completely. A couple people tried to tell me that Duncan's death was a miscarriage, and even though it wasn't me personally going through that trial, it still made me angry to have his birth and homegoing referred to (in my opinion) so cheaply. I'm just sorry that you've heard it enough to have to write about "that" type of statement. Still loving you and praying for you from all these miles away!